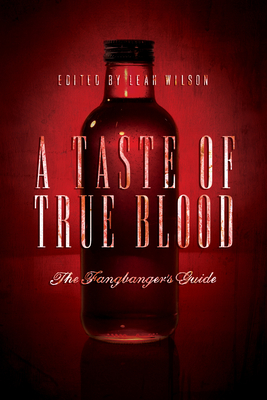 A Taste of True Blood

A Taste of True Blood: The Fangbanger's Guide gives those fans something to savor between episodes—and whets their appetite for more. Covering the show's first two seasons and released just in time for the third (with real-time online updates from the book's contributors throughout season three), the book includes pieces on:

• Vampire Bill's season 2 slide from hot to not
• Sookie's mind-reading talents as a critique of our oversharing Facebook culture
• What a Louisiana setting adds to the traditional vampire myth
• Why the television series had to differ from the books (co-written by the Southern Vampire mysteries' editor Ginjer Buchanan)
• And much more, from shapeshifters to maenads to Merlotte's

Jacob Clifton is a staff writer for the website Television Without Pity. His weekly critical columns (for both reality and genre shows, including True Blood) have won awards; been included in the syllabi for graduate courses in psychology, philosophy, and queer and media studies; and been syndicated on MSNBC and Yahoo! This year, the focus is on writing more fiction, publishing novels Serious Vanity and The Urges, and actually traveling outside Austin once in a while.

In the early 70s, Ginjer Buchanan moved from Pittsburgh, Penn. to New York City where she made her living as a social worker, while doing freelance editorial work. In 1984, she took a job as an editor at Ace Books. She has been promoted several times. Her current title is Editor-in-Chief, Ace/Roc Books. Her first (and only) novel, a Highlander tie-in titled White Silence, was published in February of 1999. She has also had "pop culture" essays included in the third Buffy, The Vampire Slayer episode guide and in Finding Serenity, a collection about Joss Whedon's Firefly.

Maria Lima is a writing geek with one foot in the real world and the other in the make-believe. Her Blood Lines series (Pocket/Juno) is set in the Texas Hill Country—a fabulous place for things that go bump in the night. Maria loves to read, write, and watch genre TV and feels very lucky that people actually pay her to do one of these things. Her role models include all the amazing kick-ass women who write urban fantasy. Find her at TheLima.com or at her blog ChickWriter.com.

Nick Mamatas is the author of two novels, Under My Roof and Move Under Ground, and over sixty short stories many of which were recently collected in You Might Sleep... His non-fiction has appeared in H+, The New Humanist, The Smart Set, Village Voice, and many other periodicals and anthologies, including over ten Smart Pop titles. A native New Yorker, Nick now lives in Berkeley, Calif.

Bev Katz Rosenbaum, author of the teen paranormal novels I Was a Teenage Popsicle and Beyond Cool, is a certified television addict. She lives in Toronto with her family, though she desperately wants to move to Bon Temps, Louisiana. This is Bev's second Smart Pop essay. "Destiny: Disaster" appeared in Perfectly Plum about Janet Evanovich's fictional New Jersey-based bounty hunter, Stephanie Plum.

Alisa Kwitney is the author of a number of different novels and graphic novels featuring working class intellectuals, including the Eisner nominated miniseries Destiny: A Chronicle of Deaths Foretold, and two idiosyncratic paranormal romances, The Better to Hold You and Moonburn, published under the name Alisa Sheckley. A former editor at Vertigo/DC comics, Alisa has an MFA in Fiction from Columbia University and has taught graphic novel writing at Fordham. She lives in the Hudson River Valley with her family and assorted beasts.

Vera Nazarian immigrated to the USA from the former USSR as a kid, sold her first story when seventeen, and has been published in numerous anthologies and magazines, seen on Nebula Awards® Ballots, honorably mentioned in Year's Best volumes, and translated into eight languages. A member of Science Fiction and Fantasy Writers of America, she made her novelist debut with the critically acclaimed Dreams of the Compass Rose (Wildside Press, 2002), followed by Lords of Rainbow (Betancourt & Company, 2003). Her novella The Clock King and the Queen of the Hourglass (PS Publishing, UK) made the Locus Recommended Reading List for 2005. Her debut short fiction collection Salt of the Air (Prime Books, 2006, expanded and reissued by Norilana Books, 2009) contains the 2007 Nebula Award-nominated "The Story of Love." Recent work includes the 2008 Nebula Award-nominated fantasy novella The Duke In His Castle, and Jane Austen monster parodies Mansfield Park and Mummies and Northanger Abbey and Angels and Dragons. Vera lives in Los Angeles. In addition to being a writer and award-winning artist, she is also the publisher of Norilana Books.

Peg Aloi is a freelance film critic, cinema scholar, and teacher of media studies. She also works as a freelance editor and landscape designer. Her anthology Bloodlust and Dust: Essays on Carnivale (co-edited with Hannah Johnston) is forthcoming in 2010 from McFarland. Her poems have been published in the online magazine Goblin Fruit. Her hobbies include singing traditional music, trash-picking, gardening, baking, and covering old furniture with pre-Raphaelite images.

Kirsty Walker turned an obsession with screens into a patchy and unsuccessful media career. A Manchester University graduate in TV Production, she was employed variously as a runner, corporate video director, and radio station manager before she turned to teaching. She is the content editor for EndofShow.com and travels from Cannes to Comic Con using her press pass to score free drinks and easily impressed men. She lives in Runcorn, in the north west of England.

Joseph McCabe is the associate editor of FEARnet.com, the West coast editor of SFX magazine, and the Bram Stoker and International Horror Guild Award-nominated author of Hanging Out with the Dream King: Conversations with Neil Gaiman and His Collaborators. His essays have appeared in the BenBella anthologies The Man from Krypton and Webslinger. He lives in Los Angeles with his wife, the photographer Sophia Quach.

Paula Rogers is a writer and illustrator based in San Francisco. Originally from Texas, she will always be fond of her Southern roots. Her work in print and radio has been published or aired by San Francisco's KQED Public Radio, NPR, the Third Coast International Audio Festival, and Salon. She was the storyboard editor for Show Me How, an infographic guide to life published by Harper Collins, and illustrates for upcoming books in the series. She enjoys painting, opining, and nurturing an unhealthy interest in numerous fictional characters.

Daniel M. Kimmel is a Boston-based film critic whose reviews appear in the Worcester Telegram & Gazette. He is the Boston correspondent for Variety and a past president of the Boston Society of Film Critics. He is an award-winning author of several books, including The Fourth Network, a history of FOX broadcasting, and The Dream Team, a history of DreamWorks. He is also a regular contributor to the Internet Review of Science Fiction.

Peter B. Lloyd was trained in science and software engineering but has a passion for philosophy, and has published several articles and books bringing philosophy out of academia. After more than a decade in university research—first in solar engineering and then in clinical trials at Oxford University—he has worked for several years as a freelance software developer. He runs his own consultancy business, which also trades as Whole-Being Books to publish books written by himself and his wife Deborah Marshall-Warren. He has previously contributed to the Smart Pops series in Taking the Red Pill and The Man from Krypton. His most recent project is Metatopia, a series of video interviews with people working on the frontiers of consciousness. You can find him at PeterBLloyd.org.

Jonna Rubin spends her days writing, child-wrangling, and drinking far too much caffeine while daydreaming of a world where vampires, werewolves, and other supernatural creatures actually exist. A former newspaper editor and publicist, she developed an unhealthy obsession with vampires at the age of 13 when she began checking out books about Vlad Tepes and Elizabeth Bathory from the local library; surprisingly, her mother did not send her into counseling. Since departing the high-powered world of small-town community journalism, she ekes out a living writing for very boring clients, and blogging about motherhood, pop culture, and life in rural Vermont at Jonniker.com.

Philippa Ballantine is an award nominated author and award winning podcaster who lives in Wellington, New Zealand. She writes historical and epic fantasy, and is looking forward to the release of her book Geist with Ace books in the Fall of 2010.