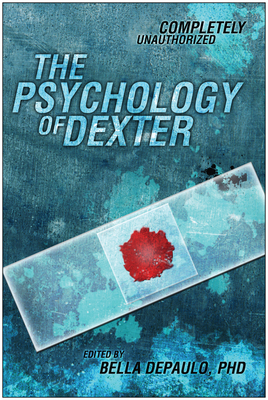 The Psychology of Dexter

Aimed at Dexter devotees and armchair psychologists, The Psychology of Dexter takes on the psychological complexities of the popular series with an eye towards insight and accessibility. It analyzes not just the title character, but his family, coworkers, and even his viewers. What makes Dexter tick? What makes a show about a serial killer so appealing to those of us at home. And do we need to be worried about our own Dark Passengers?

From the implications of faking normalcy (could it be behind Dexter’s still-in-progress emotional growth?) to where the show weighs in on the psychological debate between nature and nurture, this book gives fans a peek inside Dexter’s psyche.

Think you know Dexter? The Psychology of Dexter will make you think again.

Bella DePaulo (PhD, Harvard) is the author of Behind the Door of Deceit: Understanding the Biggest Liars in Our Lives and Singled Out: How Singles Are Stereotyped, Stigmatized, and Ignored, and Still Live Happily Ever After. She has published more than 100 scholarly articles. DePaulo's work on deception has been described in the New York Times, the Washington Post, the Wall Street Journal, Time magazine, the New Yorker, and many other publications. Dr. DePaulo has appeared as an expert on deception on ABC, NBC, CBS, CNN, PBS, the BBC, and other television outlets. She has also lectured nationally and internationally.
Loading...
or support indie stores by buying on