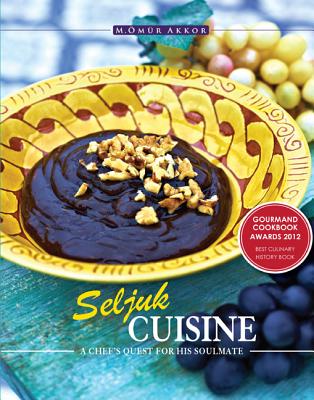 A Chef's Quest for His Soulmate

In Seljuk Cuisine, Omur Akkor looks at the cuisine of one of the earliest empires to come to Anatolia, the Seljuks. Through storytelling and history-rich recipes, Akkor shows how deeply food was intertwined with everyday life during the Seljuk period. Akkor's narration provides a window into what the Seljuks are in their dervish lodges and palaces, in their markets and homes. Then he lists many of those recipes, so that you can eat the same food the Seljuks ate many centuries ago.

Omur Akkor, a gourmet chef, was born in Kilis, Turkey, a town known with its rich cuisine. He researches the local and forgotten cuisines of Turkey and has visited hundreds of cities and towns within Turkey as part of his study of historical and contemporary recipes from Turkish cuisine. His book, The Cuisine of Bursa, won the Gourmand World Cookbook Award and the Best Local Cuisine Book Award in 2009. Akkor also won the Gourmand Cookbook Award for Best Culinary History Cookbook in 2012, and the Best Corporate Book in 2014. He lives in Istanbul, Turkey.
Loading...
or
Not Currently Available for Direct Purchase