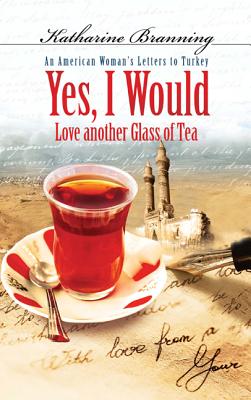 Yes, I Would Love Another Glass of Tea

An American Woman's Letters to Turkey [With MP3]

CD Audiobook + mp3 file. Yes, I Would... comprises a series of imaginary letters written to Lady Mary Montagu, whose famous Embassy Letters were written in 1716-1718 during her stay in Turkey as the wife of the English ambassador. The author uses themes dear to Lady Mary, such as culture, art, religion, women and daily life, to reflect on those same topics as encountered during the author's past 30 years of travel in Turkey. Approximate running time: 600 minutes.

Katharine Branning, MLS, is Vice-President of the French Institute Alliance Francaise in New York City, where she serves as the Director of FIAF's Library. In recognition of her work involved in the creation of over 8 libraries in both France and the United States, in 2006 she was awarded the Ordre National du Merite by the President of France, one of the nation's highest honors. Ms. Branning is a graduate of the Ecole du Louvre in Paris, where she majored in Islamic arts, with a specialty in Islamic glass."
Loading...
or
Not Currently Available for Direct Purchase