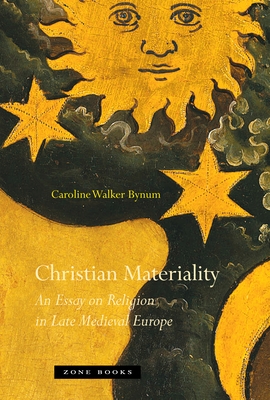 An Essay on Religion in Late Medieval Europe

Late Medieval Christianity's encounter with miraculous materials viewed in the context of changing conceptions of matter itself.

In the period between 1150 and 1550, an increasing number of Christians in western Europe made pilgrimage to places where material objects--among them paintings, statues, relics, pieces of wood, earth, stones, and Eucharistic wafers--allegedly erupted into life through such activities as bleeding, weeping, and walking about. Challenging Christians both to seek ever more frequent encounters with miraculous matter and to turn to an inward piety that rejected material objects of devotion, such phenomena were by the fifteenth century at the heart of religious practice and polemic. In Christian Materiality, Caroline Walker Bynum describes the miracles themselves, discusses the problems they presented for both church authorities and the ordinary faithful, and probes the basic scientific and religious assumptions about matter that lay behind them. She also analyzes the proliferation of religious art in the later Middle Ages and argues that it called attention to its materiality in sophisticated ways that explain both the animation of images and the hostility to them on the part of iconoclasts.

Seeing the Christian culture of the fourteenth and fifteenth centuries as a paradoxical affirmation of the glory and the threat of the natural world, Bynum's study suggests a new understanding of the background to the sixteenth-century reformations, both Protestant and Catholic. Moving beyond the cultural study of "the body"--a field she helped to establish--Bynum argues that Western attitudes toward body and person must be placed in the context of changing conceptions of matter itself. Her study has broad theoretical implications, suggesting a new approach to the study of material culture and religious practice.

Caroline Walker Bynum is Professor of Medieval European History, Institute for Advanced Study, Princeton, New Jersey, and University Professor Emerita at Columbia University. She is the author of Fragmentation and Redemption: Essays on Gender and the Human Body in Medieval Religion and Metamorphosis and Identity, both published by Zone Books.
Loading...
or
Not Currently Available for Direct Purchase