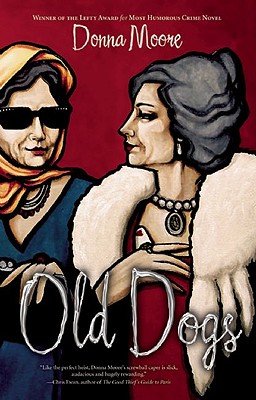 A comic crime novel centered around the heist of a pair of jewel-encrusted gold dog statuettes.

"Hilarious... A hypnotic and rollicking experience. Moore has got to be one of the funniest writers in or out of Glasgow." -- ForeWord Reviews

"Fast and furious with perfect timing and guaranteed to leave you smiling Old Dogs is one of my favorite books of 2010." -- Jon Jordan, Crimespree Magazine

"Old Dogs is fresh and funny, a genuine load of laughs with a believably quirky, endearing, and hilarious cast of characters. It's the sort of a wild frolic you've come to expect from Donna Moore, and she hasn't let us down." -- Tom Piccirilli, award-winning author of Shadow Season

"Donna Moore proves that …Go to Helena Handbasket was no fluke. Old Dogs is even better. You can't go wrong with two former hookers in their 70s, a great caper, and a cast of serious loonies. It's the funniest crime novel I've read in a long time, and if Judi Dench and Vanessa Redgrave don't star in the movie version, I'm going to be very disappointed." -- Bill Crider, award-winning author of Murder in the Air

"[Donna Moore] has surpassed herself in her wit, insight and sheer turn of phrase in Old Dogs. Take Joan Rivers, add some less acerbic Susan Silverman and sprinkle with the sheer story-telling glee of early Carl Hiaasen and you’ll have some idea of what to expect. Roll out the awards shelf, Donna is going to grab them all. Her wondrous artistry makes it seem so easy, and books this readable and compelling are anything but easy to achieve. This is true art. Beware, you may want to grab passers-by and insist they hear a passage read aloud, it’s that good." -- Ken Bruen, award-winning author of London Boulevard

Donna Moore is the author of GO TO HELENA HANDBASKET, her spoof PI debut which won the Lefty Award in 2007 for the most humorous crime fiction novel. She has also had short stories published in various anthologies, including BFP's DAMN NEAR DEAD and A HELL OF A WOMAN. Donna runs a blog which focuses on Scottish crime fiction.
Loading...
or
Not Currently Available for Direct Purchase