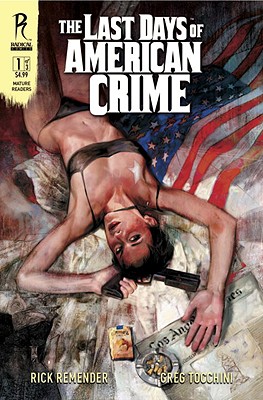 In the not-too-distant future as a final response to terrorism and crime, the U.S. government plans in secret to broadcast a signal making it impossible for anyone to knowingly commit unlawful acts. To keep this from the public, the government creates a distraction, installing a new currency system using digital charge cards.

Enter: Graham Bricke. A career criminal never quite able to hit the big score, Graham intends to steal one of the charging stations, skip the country and live off unlimited funds for the rest of his life. But the media has leaked news of the anti-crime signal one week before it was to go live...and now Graham and his team have just a few days to turn the crime of the century into the last crime in American history.


Praise For The Last Days of American Crime Book 1…

"A winning plot, hard-as-nails dialog and art by Greg Tocchini that packs a gut punch..." -Ain't It Cool News

"The Last Days of American Crime is addictive, leaving the reader twitching for their next fix..." -Comics Bulletin

Rick Remender is the writer/creator of comics such as "Fear Agent, The End League, Strange Girl, Black Heart Billy, Sea of Red, Sorrow, Night Mary, XXXOMBIES, Gigantic "and "Doll""and Creature." He is the current writer of Marvel's "Punisher" and has also served as writer on DC's "Booster Gold" and "The Atom."
Loading...
or
Not Currently Available for Direct Purchase