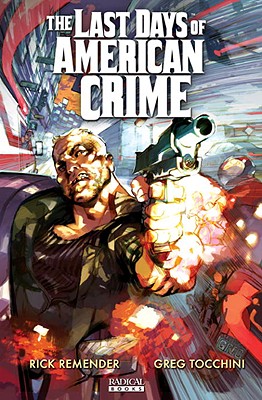 With only a few days left to pull off the last great crime in American history, the tension mounts as secrets and double crosses are revealed. While trained killer Kevin Cash goes to retrieve an important component to the heist, his girlfriend Shelby seduces Graham Bricke as they deal with their own set of problems. Left-for-dead gangster Enrique is looking for revenge along with two mysterious cops that are following their every move.  With Shelby kidnapped by Enrique's Mexican gang, can Graham rescue her before time runs out?


Praise For The Last Days of American Crime Book 2…

"A winning plot, hard-as-nails dialog and art by Greg Tocchini that packs a gut punch..." -Ain't It Cool News

"The Last Days of American Crime is addictive, leaving the reader twitching for their next fix..." -Comics Bulletin

Rick Remender is the writer/creator of comics such as "Fear Agent, The End League, Strange Girl, Black Heart Billy, Sea of Red, Sorrow, Night Mary, XXXOMBIES, Gigantic "and "Doll""and Creature." He is the current writer of Marvel's "Punisher" and has also served as writer on DC's "Booster Gold" and "The Atom."
Loading...
or
Not Currently Available for Direct Purchase