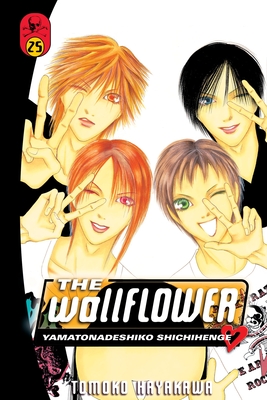 After the gorgeous Kyohei kisses her, the anxious and awkward Sunako becomes convinced that it was harassment.  She gets revenge by putting a curse on Kyohei, but when he becomes severely ill, it appears that her curse went too far.  Only a kiss from Sunako can break the curse, but can she finally admit that she really does care about him?  Or will her penchant for darkness be his true downfall?

Includes a bonus manga by Tomoko Hayakawa and lots of additional goodies!

Praise For The Wallflower 25…

• "Given the amount of reality-based makeover shows on TV today, The Wallflower couldn't have hit at a better time. Its plot is ripe for a reality-TV incarnation... You'll have to pick up this engaging little shoujo drama." --NewType USA (Book of the Month)
• "Creator Tomoko Hayakawa has a sexy sense of humor that she serves up with spiderwebs and a whiff of formaldehyde." --SequentialTart.com

TOMOKO HAYAKAWA has written several manga series, but The Wallflower (Yamatonadeshiko Shichihenge) is her most popular.
Loading...
or
Not Currently Available for Direct Purchase