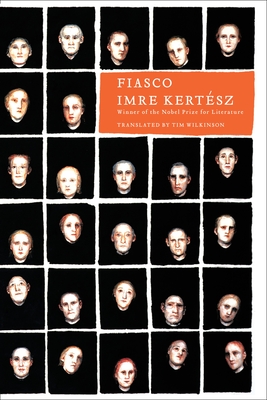 Translated into English at last, Fiasco joins its companion volumes Fatelessness and Kaddish for an Unborn Child in telling an epic story of the author's return from the Nazi death camps, only to find his country taken over by another totalitarian government.

Fiasco as Imre Kertesz himself has said, "is fiction founded on reality"—a Kafka-like account that is surprisingly funny in its unrelentingly pessimistic clarity, of the Communist takeover of his homeland. Forced into the army and assigned to escort military prisoners, the protagonist decides to feign insanity to be released from duty. But meanwhile, life under the new regime is portrayed almost as an uninterrupted continuation of life in the Nazi concentration camps-which, in turn, is depicted as a continuation of the patriarchal dictatorship of joyless childhood. It is, in short, a searing extension of Kertesz' fundamental theme: the totalitarian experience seen as trauma not only for an individual but for the whole civilization—ours—that made Auschwitz possible.

"Heroic....Kertész is unique in Holocaust literature....[H]e seems to flaunt the thoughts and feelings that contradict the accepted narrative."
—Nan Goldberg, The Boston Globe

"[A] powerful book.... If Fatelessness was written with a bright mock-naivety that led to comparisons with Candide, and Kaddish employed the harsh comic rant of Thomas Bernhard, then the presiding ghosts of Fiasco are clearly Beckett and Kafka, those 20th-century masters of confusion and despair."
—Adam Kirsch, Tablet Magazine

"[O]ne of the best renderings of what it must have been like to survive a Nazi murder camp."
—The Los Angeles Times

"Fiasco plays with the art of bearing witness with great risk and proclaims the magnitude of what's becoming an endangered species, the individual, whose death in this century has been repeatedly proclaimed, celebrated and here, denied."
--Hans-Harald Muller, Die Welt (Germany)

"We knew Imre Kertesz capable of dry wit  in the most horrific moments, but his representation of the socialist world reveals a great sense of humor that we did not know about...here we all laugh. And we laugh intelligently."
--L'Express (France)

Imre Kertesz was born in Hungary in 1929. At the age of fourteen he was imprisoned at Auschwitz and later at Buchenwald concentration camps. He is the author of 14 books of fiction and non-fiction, and was awarded the Nobel Prize for literature in 2002 for "writing that upholds the fragile experience of the individual against the barbaric arbitrariness of history." He lives in Berlin.

Tim Wilkinson is the primary English translator of Imre Kertesz. His translations include Kaddish for an Unborn Child, Liquidation, The Pathseeker and The Union Jack as well as numerous other significant works of Hungarian history and literature. His translations of Kertesz's Fatelessness was awarded the PEN Club Translation Prize. He lives in London.
Loading...
or
Not Currently Available for Direct Purchase