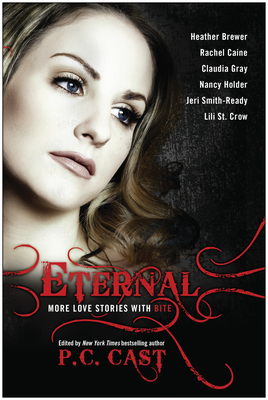 Now Eternal: More Love Stories With Bite presents all-new YA stories featuring vampires, the romantic heroes and heroines that still hold the reading public enraptured. A mix of writers from the first anthology and new contributors makes for a fresh new collection with all of the dark romance of its predecessor, and a book that's sure to thrill vampire romance fans old and new.

The book includes an original introduction by Cast.

P.C. Cast is an award-winning fantasy and paranormal romance author, as well as an experienced speaker and teacher. In addition to her New York Times bestselling paranormal YA series for St. Martin's, The House of Night, she writes the popular Goddess Summoning Books for Berkley, and epic fantasy novels set in the world of Partholon for LUNA. Her novels have been awarded the prestigious: Prism, Holt Medallion, Daphne du Maurier, Booksellers' Best, and Laurel Wreath.

Currently she lives and teaches in Oklahoma with her talented daughter who is attending college, her spoiled cat (who has refused higher education), and her Scottie dogs – better known as The Scottinators. Ms. Cast loves to hear from her fans and can be reached through her website, pccast.net.

Contributors to Eternal include:

Rachel Caine (the Morganville Vampires series) revisits the setting of her popular series, where the vampires are in charge and love is a risky endeavor, even when it comes to your own family

Claudia Gray (Evernight) takes us into the world of her Evernight series, in which a pre–Civil War courtesan-to-be is courted by a pale, fair-haired man whose attentions are too dangerous to spurn, in more ways than one

Nancy Holder (the Wicked series, "Buffy the Vampire Slayer") immerses us in a post-apocalyptic New York where two best friends are forced to make a choice that may kill them both

Lili St. Crow is the author of several urban fantasy, paranormal romance, and young adult books. She lives in Vancouver, Washington, with her two children, three cats, and assorted other strays.
Loading...
or
Not Currently Available for Direct Purchase