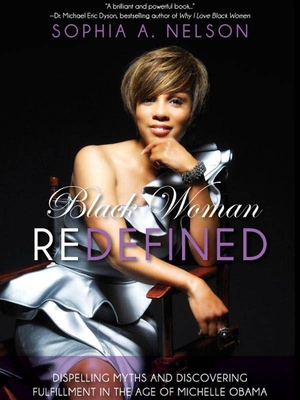 Dispelling Myths and Discovering Fulfillment in the Age of Michelle Obama

Stereotypes aren't funny when they follow you everywhere. This is the rallying cry that author Sophia A. Nelson wants all of America to grapple with when it comes to the way we view and treat black women. Black Woman Redefined was inspired in part by what Nelson calls "open season on accomplished black women," which reached a tipping point in 2007 when Don Imus referred to black female Rutger's University basketball co-eds as "nappy-headed hos." Since then, we've seen First Lady Michelle Obama caricatured on the infamous New Yorker cover, when she was called "angry" and "unpatriotic"; the 2009 groundbreaking Yale University Study on professional black women titled, "Marriage Eludes High-Achieving Black Women"; ABC's "Why Can't a Successful Black Woman Find a Man?" and the Internet video that went viral, "Black Marriage Negotiations," featuring a successful black woman interviewing a nice black man to be her mate in a robotic, controlling, emasculating, Bible-thumping demeanor. More recently, we were subjected to the 2011 Super Bowl commercial that started a national firestorm featuring an "angry black woman" throwing a soda can at her mate, after first kicking, slapping, and emasculating him. Nelson says black women are tired of such depictions that portray them as manless, childless, angry, and unfulfilled. Nelson sets out to change this cultural perception, taking readers on a no-holds-barred journey into the hearts and minds of accomplished black women to reveal truths, tribulations, and insights like never before. She says it is time for a REDEFINITION among black women in America.

Praise For Black Woman Redefined: Dispelling Myths and Discovering Fulfillment in the Age of Michelle Obama…

"More than anything else, Nelson's work is a how-to book, a feel-good tome that offers black women prescriptions for personal and professional success that empower them without tearing down someone else."
DeWayne Wickham, USA TODAY columnist

On the page as she does on television, Sophia A. Nelson uses bold insights and no-nonsense observations to cut through the myths and misperceptions about what it means to be a black woman today. But this isn’t just a book for black women. It speaks to everyone who cares about equality and opportunity, and especially to women, of every color, who are looking for a fresh perspective on everything from careers to dating to faith. Whether you agree or disagree with
her, you’ll find it hard to put this book down.”
Chris Jansing, Emmy-Award winning anchor and host of MSNBC’s Jansing & Co

The enduring legacy of any great work is that it touches our souls and causes us to reflect inward. It calls us to open our eyes, step out of the shadows of our pain, and to live life forward. Black Woman Redefined does that for us all. This brilliant, powerful book is not just about and for black womenit invites the entire American family to see black women more fully as people. Sophia A. Nelson is one of the most gifted analysts and writers of our time. She effectively rejects the centuries-old myth that black women’s lives aren’t worth discussing. The often painful stories shared in this book are still being told because they’re still being lived. In the end, this book is a much-needed generational battle cry for recognition, release, and healing.”
Michael Eric Dyson, Professor at Georgetown University, radio host of the Michael Eric Dyson Show, and best-selling author of Why I Love Black Women

In her first book, Sophia A. Nelson gives us all great insight and information on some of the serious issues facing today’s African American women. This book is bound to generate discussion across the social and political spectrum for years to come.”
Sean Hannity, best-selling author, radio show host, and host of FOX News’ top-rated political program Hannity

Each generation has a voice that is lifted at just the right time to grab hold of us and shake us from our slumber. Sophia A. Nelson calls on black women to rethink the way things are and change them. She has tapped into the pain and silence of her generation of sisters,’ and approaches this important subject matter in a way that is compassionate and profound. Sophia carefully dissects the continuing, yet often invisible, struggle of modern day black women when
it comes to our image, the perceptions that others have of us, and that we have of ourselves.”
Terrie M. Williams, author, Black Pain: It Just Looks Like We’re Not Hurting

Nelson uncovers the issues that are often hidden beneath the surface of black women’s pain, and demonstrates to all how to live well and emerge victorious on the other side.”
Dr. Melody T. McCloud, OB/GYN- columnist Psychology Today and author of Living Well, Despite Catchin’ Hell: The Black Woman’s Guide to Health, Sex, and Happiness

Think redefinition.’ Sophia A. Nelson’s new book Black Woman Redefined cuts through a mountain of myths, stereotypes, and negative thinking. The result is a treasure chest of new information, valuable insights, and inspiring advice for African American womenand for us, the men who love them!”
Clarence Page, Pulitzer Prize-winning syndicated columnist for the Chicago Tribune

At a moment of profound economic and cultural change for America, Black Woman Redefined comes along at the perfect time. While Sophia A. Nelson knows her target audience, she’s also aware of the broader, diverse world. With solid research and a smooth inclusive voice, Nelson has produced a book that that holds lessons for many.”
Robert A. George, New York Post

Black Woman Redefined is a book that has been greatly anticipated because it was penned by a woman who for years has displayed refreshing analytical and political savvy first as an attorney on Capitol Hill, then as a lobbyist, and finally as a national TV commentator and columnist. This book encourages black women to do what Sophia A. Nelson has exhibited to us all for years: how to be a successful sister, wrapped with old-fashioned charm, endless grace, an unflinching determination, and a passion for serving others seldom seen in our modern times.”
Hamil Harris, Washington Post, Emmy-Award winning videographer

The research and insight in this book lend to a much-needed discussion of just how far African American women have come and how far they have to go.”
Mika Brzezinski, co-host of MSNBC’s Morning Joe and author of Knowing Your Value

Black Woman Redefined offers an urgent message that readers need to hear now: Put yourself first. The stories Sophia A. Nelson offers, coupled with thorough research and data, will make this read a game changer. Many conversations will begin about this book over many, many years and that’s a good thing.”
Essence magazine

Sophia A. Nelson is the chairman and founder of iask, Inc. (aka "I Am My Sister's Keeper") an international organization dedicated to the service, self, and success of professional black women. She is a popular blogger and much sought-after national columnist, speaker, and political/social commentator for media outlets such as CNN, Fox News, MSNBC, NPR, The Huffington Post, BET, and BBC. Her opinion pieces have appeared in "The Washington Post, The Washington Times, The Wall Street Journal, The New York Times, Chicago Sun Times, USA TODAY, Essence, " and "National Law Journal/LegalTimes."
Loading...
or
Not Currently Available for Direct Purchase