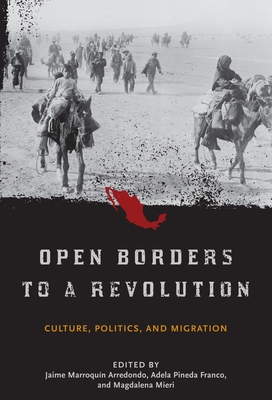 Open Borders to a Revolution

Jaime Marroquín Arredondo is an Assistant Professor of Spanish at The George Washington University (Washington, D.C.). He obtained his PhD in Hispanic Literatures at the University of Texas at Austin, where he worked with Uruguayan poet Enrique Fierro. He is the author of La Historia de los Prejuicios en América. La Conquista (2007). He just finished a new book, Describing Anahuac: the American Beginnings of Modernity (1492–1590), along with its Spanish version, Los Diálogos de Cristo y la Serpiente Quetzal: México y los Inicios de la Modernidad (1492–1590) (both forthcoming) which is about the Spanish description of American nature at the time of their conquest of La Española and Mexico.

Adela Pineda Franco is an Associate Professor of Spanish American literature in Department of Romance Studies and the Latin American Studies Program at Boston University. Her research interests focus on nineteenth- and twentieth-century Spanish American literature, culture, and film and on the relationship between politics and culture. She is the author of Geopolíticas de la Cultura Finisecular en Buenos Aires, París y México: Las Revistas Literarias y el Modernismo (2006) and coeditor with Leticia Brauchli of Hacia el País del Mezcal (2002) and, with Ignacio Sánchez, of Alfonso Reyes y los Estudios Latinoamericanos (2004). She was awarded a grant by the US-Mexico Fund for Culture and the Rockefeller Foundation. She is currently at work on a book project on Mexico City, its lettered culture, film, and the Mexican Revolution.

Magdalena Mieri is currently the Director of the Program in Latino History and Culture at the National Museum of American History, Smithsonian Institution in Washington, D.C. Her role is to organize and implement a variety of programs and to develop collaborations across the museum, and at the local and national levels, to tell the rich stories of Latinos. Before her position at the Museum, she was the Museum Specialist and Director of the Latino Virtual Gallery at the Smithsonian Center for Latino Initiatives. She has been with the Smithsonian Institution since 1992. Ms. Mieri has consulted with museums in Argentina, Peru, Mexico, Uruguay and Bolivia. Before joining the Smithsonian she was Assistant Curator at the Museo de Arte Hispanoamericano in Buenos Aires, Argentina. She holds a Senior Fellow position in the Department of Anthropology, at University of Maryland, College Park, and has taught graduate level courses in the Masters of Museum Education at George Washington University and in the Certificate in Museum Scholarship at the University of Maryland. Ms. Mieri has published a number of articles on museum representation and community museums, her latest published in 2010 in Narratives of Community: Museums and Ethnicity; Museums Etc. Edinburg. Ms. Mieri received her BA in Museum Studies from the Argentine Institute of Museology and her MA in Anthropological Sciences from the University of Buenos Aires, Argentina.
or
Not Currently Available for Direct Purchase