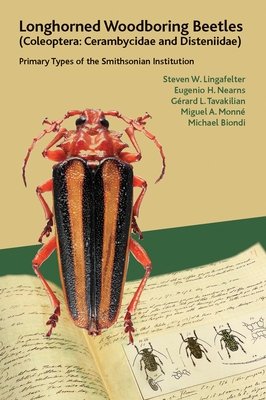 Cerambycidae and Disteniidae): Primary Types of the Smithsonian Institution

In terms of quantity and breadth, the Smithsonian Institution’s collection of longhorned woodboring beetles is one of the most important in the world. The effort to establish and describe this collection began as early as 1889, when the Smithsonian hired its first coleopterist (who was also only the second salaried entomologist at the Institution). In the years that followed, the collection grew thanks to the work of not only Smithsonian and U.S. Department of Agriculture entomologists, but also passionate amateur coleopterists who collected thousands of beetle specimens as they traveled the world for their professional occupations and then donated their unique collections to the Smithsonian. By 1957, the collection included nearly 200,000 specimens from around the world. Longhorned Woodboring Beetles (Coleoptera: Cerambycidae and Disteniidae): Primary Types of the Smithsonian Institution is the first complete catalog of Coleoptera primary types housed at the Smithsonian and includes stunning full-color images of each type specimen. The product of more than a decade of curatorial research and care, it reaffirms the superior international status of this truly remarkable collection.

The National Museum of Natural History (Smithsonian Institution) houses an outstanding insect collection.  Its assemblage of longhorned beetles alone comprises approximately 8,000 species that have been identified and put into a database (this number likely will double when the collection is fully curated).  With some 2,100 primary type specimens, this is one of the finest collections of its type in the world and an invaluable resource for researchers in the field of entomology.  Holdings of primary-type specimens by museums and academic institutions are of particular importance to entomologists interested in studying originally described type specimens.  In this first complete catalogue of the Smithsonian’s longhorned woodboring beetle collection, a list of all primary specimen types is made available.  Following this is a collection of color plates illustrating each specimen as a thumbnail image.  A short introduction provides an interesting historical perspective on the Smithsonian’s collection of Cerambycidae.  The photographs may be of limited interest to beetle enthusiasts; however, the text will be particularly valuable to specialists interested in beetle taxonomy, including graduate students, postdoctoral researchers, and professional staff. --D. A. Brass, independent scholar

Steven W. Lingafelter has been a Research Entomologist with the Systematic Entomology Laboratory, United States Department of Agriculture, based at the Smithsonian Institution's National Museum of Natural History since 1996.  He received his Bachelor and Master of Science Degrees in Biology at Midwestern State University (Wichita Falls, Texas) in 1989 and 1991, respectively, advised by Norman Horner.  He received his Doctorate in Entomology advised by the late Steve Ashe at the University of Kansas (Lawrence, Kansas) in 1996.  He has published over 60 papers and 4 books on beetle systematics and taxonomy, with an emphasis on Neotropical Cerambycidae.

Eugenio H. Nearns is a United States Department of Agriculture Postdoctoral Researcher at the Smithsonian Institution’s National Museum of Natural History.  He received his Bachelor of Fine Arts and Master of Science degrees from the University of Florida (Gainesville, Florida) in 1996 and 2006, respectively. He received his Doctorate in Biology from the University of New Mexico (Albuquerque, New Mexico) in 2013. He has published 33 papers on beetle systematics and taxonomy, with an emphasis on Neotropical Cerambycidae.  He has developed and maintained many websites that can be accessed from http://cerambycids.com/.

Gérard Luc Tavakilian, after studying biochemistry at Paris University, was employed as a Research Entomologist by the Institut de recherche pour le développement (IRD; a French government institute for researchers abroad). He spent four years in the Ivory Coast and 19 years in French Guiana, where he primarily studied Cerambycidae in relation with their host trees. He initiated a database of American species of Cerambycidae in 1996 and decided to enlarge his project to worldwide fauna in 2002 (supported by grants from the European GBIF program 4D for Life). He retired in 2012 but remains active in Entomology (as Attaché au Laboratoire d’Entomologie du Muséum d’Histoire Naturelle de Paris) and continues to publish about French Guiana’s fauna and update the database TITAN (http://lully.snv.jussieu.fr/titan). He has published over 70 papers mainly on systematics, taxonomy, and host–plant relations.

Miguel Angel Monné has been a Professor of Entomology in the Museu Nacional, Universidade Federal do Rio de Janeiro, from 1974 to 2008. He retired in 2008 and received the honorary title of Emeritus Researcher of the Museu Nacional. He received his Doctorate in Zoology from the University of São Paulo, was head of the Department of Entomology for 10 years at the Museu Nacional, and became Associate Director of Research and Teaching and Vice Director at the same institution in 1990.  He has been a Research Fellow of the National Council for Scientific and Technological Development of Brazil since 1980.  He has published 167 papers and authored or contributed to 35 books, with emphasis on Neotropical Cerambycidae.

Michael Biondi worked as a museum technician at the Smithsonian Institution's National Museum of Natural History between 2009 and 2011.  He received his Bachelor of Science degree in Biology from Erskine College and his Master of Science in Entomology with a focus on stream ecology from Clemson University.  He currently co-owns and operates a micro-brewery in Charleston, South Carolina.
Loading...
or
Not Currently Available for Direct Purchase