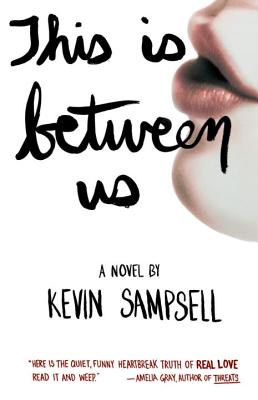 This Is Between Us

“Sampsell's This Is Between Us is a tangible, breathtaking work of writing. This is a love letter laced with hope, pain, doubt, intoxication, apprehension, and a veritable ocean of feeling, navigated with impeccable skill and grace. Wonderful!”
— Jim Brimble, Third Place Books, Lake Forest Park, WA
View the List

This Is Between Us, Kevin Sampsell's utterly engrossing debut novel, is a confessional tale of love between two resilient people who have staked their hearts on each other.

Chronicling five years of a troubled romance, This Is Between Us offers an intimate view of one couple’s struggle—from the illicit beginnings of sexual obsession to the fragile architecture of a pieced-together family. Full of sweet moments, emotional time bombs, unexpected humor, and blunt sexuality, the daily life of this man and woman, both recently divorced, with children and baggage in tow, emerges in all of its complexity. In this utterly engrossing debut novel, Kevin Sampsell delivers a confessional tale of love between two resilient people who have staked their hearts on each other.

Kevin Sampsell is the author of the memoir A Common Pornography (2010 Harper Perennial) and the short story collection Creamy Bullets (Chiasmus) and the editor of the anthology Portland Noir (Akashic).

Sampsell is the publisher of the micropress Future Tense Books, which he started in 1990. He has worked at Powell's Books as an events coordinator and the head of the small press section for fifteen years. His essays have appeared recently in Salon, the Faster Times, Jewcy, and the Good Men Project. His fiction has been published in McSweeney’s,Nerve, Hobart, and in several anthologies. He lives in Portland, OR, with his wife and son.