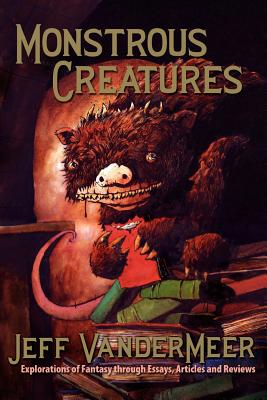 Explorations of Fantasy Through Essays, Articles and Reviews

Culture Critiques from the Author of Annihilation

An entertaining, eclectic chronicle of modern fantastical fiction, Monstrous Creatures delivers incisive commentary, reviews, and essays pertaining to permutations of the monstrous, whether it's other people's monsters, personal monsters, or monstrous thoughts. A two-time winner of the World Fantasy Award, Jeff VanderMeer is one of speculative fiction's foremost voices. For the past 20 years, he has not only written weird literary fiction translated into 20 languages, but written about it extensively, influencing the way people think about fantasy through reviews in major papers like The Washington Post and The New York Times, as well as through interviews, thoughtful essays, blog posts, teaching, and guest-speaking.

Monstrous Creatures, a follow-up to his 2004 nonfiction collection Why Should I Cut Your Throat?, collects all of his major nonfiction from the past five years, including such controversial pieces as "The Romantic Underground," "The Triumph of the Good," and "The Language of Defeat". Interviews with writers like Margo Lanagan and China Mi ville are an added bonus, creating a dialogue with VanderMeer's own interpretations of the monstrous in the fantastical.