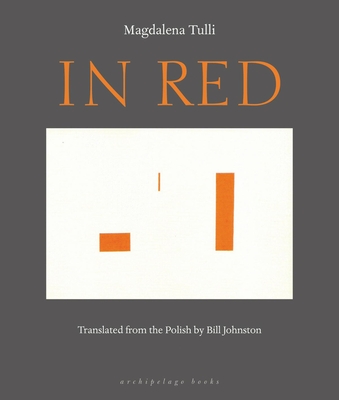 By the Koscielski Prize-winning author of Dream and Stones, In Red is the gripping cautionary tale in which real and unreal combine explosively, making us question the nature of the work itself. Set in an imaginary fourth partition of Poland, In Red retraces the turbulent history of the Twentieth Century in a labyrinth of greed, inheritance, and entropy, enacting—word by tremulous word—the claustrophobia of a small town from which there seems to be no escape. Never have Tulli's trademark precision of language and her crystalline storytelling been put to such brilliant use.

Magdalena Tulli's other novels include Dreams and Stones and Moving Parts, nominated for the 2006 International IMPAC Dublin Literary Award, and Flaw, shortlisted for the 2007 Nike Prize, Poland's most prestigious literary award. Tulli is also the translator of Proust and Calvino into Polish. She lives in Warsaw.

Bill Johnston is the Chair of the Comparative Literature Department at Indiana University. His translations include Wieslaw Mysliwski's Stone Upon Stone, and Magdalens Tulli's Dreams and Stones, Moving Parts, and Flaw. His 2008 translation of Tadeusz Rózewicz's new poems won the inaugural Found in Translation Prize and was shortlisted for the National Book Critics Circle Poetry Award.

Praise For In Red…

Like all great works of art, Tulli¢s books create something new, something that doesn't correspond to what the reader has been conditioned to expect. —Rain Taxi

As Tulli demonstrated with a quick swish of the knives, story can keep peeling off from itself and regenerating, like a snake with ever renewable skin. —Eleni Sikelianos

Tulli strings together stories with compelling logic . . . Her evocation of a town where everything beautiful is tainted with death never feels far removed from reality. —The New Yorker

There is much to treasure. Tulli plays with the line between unexpected and quirky very well. . . . You can't help but to want to return again and again. —NPR

Powerful imagery caught in a sinewy, architectural, elegiac prose. An inner-outer dance of cityscape with the taut emotion, terror & psyche of the 'human.' Where are we? What magical zone of dream and stone? We are inhabitants of the wild, brilliant imagination of Magdalena Tulli. This book is a great pleasure to read: deeply provocative, intuitive, haunting. 'I hunt among stones' was Charles Olson's probing line, a mission manifested here with full beauty & finesse. And rendered from Polish to English in an inspired translation by Bill Johnston. —Anne Waldman

A beautifully flowing translation. Johnston aptly captures the dreamy as well as the stark quality of the original. —Danuta Borchardt
or
Not Currently Available for Direct Purchase
Copyright © 2020 American Booksellers Association