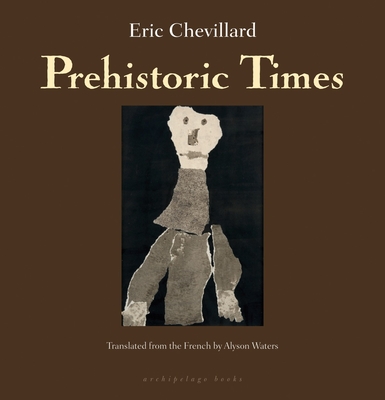 The narrator of Prehistoric Times might easily be taken for an inhabitant of Beckett’s world: a dreamer who in his savage and deductive folly tries to modify reality. The writing, with its burlesque variations, accelerations, and ruptures, takes us into a frightening and jubilant delirium, where the message is in the medium and digression gets straight to the point. In an entirely original voice, Eric Chevillard asks looming and luminous questions about who we are, the paths we’ve been traveling, and where we might be going – or not.

Prehistoric Times shows Chevillard at his best: off-kilter and linguistically dazzling, playful and acrobatic, quite mad but always entertaining—and all impossibly captured by Alyson Waters' fluid and masterful translation. —Brian Evenson, author of Windeye and Immobility

Chevillard’s book is a very profound contemplation on the nature of posterity; it may even be inferred that throughout Prehistoric Times Chevillard writes with an awareness that his own artistic production will be dwarfed within the great span of time against which all human beings must live out their brief existence. —Jordan Anderson, The Quarterly Conversation

Mix together one pinch of surrealism, one pinch of ‘situationalism,’ stir in a large measure of poetry, quite a bit of talent and you will get a glittering novel of intelligence and humor . . . —Jean-Claude Lebrun, Révolution

Eric Chevillard involves his reader in a powerful meditation on evil, foolishness, and inhumanity lurking in the heart of man. —Jean-Maurice de Montremy, Lire

The current American new fabulism could learn a great deal from this very amusing book and its willingness to take real narrative risks...Beautifully translated by Wyatt Mason, Palafox is a must for anyone interested in anti-realist fiction. —Rain Taxi

Eric Chevillard involves his reader in a powerful meditation on evil, foolishness, and inhumanity lurking in the heart of man. —Jean-Maurice de Montremy

Eric Chevillard is one of the most inventive authors writing in French today. His novels include On the Ceiling, The Crab Nebula, and Demolishing Nisard, all translated by Jordan Stump, and Palafox (Archipelago), translated by Wyatt Mason.

Alyson Waters’s translations include Albert Cossery’s A Splendid Conspiracy and The Colors of Infamy, Vassilis Alexakis’s Foreign Words, René Belletto’s Coda, and – with Donald Nicholson-Smith – Yasmina Khadra’s Cousin K. She lives in Brooklyn and teaches at Yale University and New York University.
Loading...
or
Not Currently Available for Direct Purchase