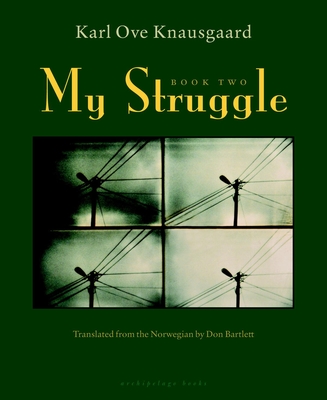 Book Two: A Man in Love

Book Two of the six-volume literary masterwork My Struggle flows with the same raw energy and candor that ignited the series’ unprecedented bestselling run in Scandinavia, a virulent controversy, and an avalanche of literary awards. Knausgaard breaks down lived experience into its elementary particles, revealing the wounds and epiphanies of a truly examined life. Walking away from everything he knows in Bergen, Karl Ove finds himself in Stockholm, where he waits for the next stretch of the road to reveal itself. He strikes up a deep friendship with another exiled Norwegian, a boxing fanatic and intellectual named Geir. He reconnects with Linda, a vibrant poet who had captivated him at a writers’ workshop years earlier, and the shape of his world changes. Book Two exposes the inner landscape of a man falling in love and the fraught joys and impossible predicaments he faces as a new father. We look on as he watches his life unfold. Love, rage, and beauty flood these pages. Knausgaard writes with exhilarating honesty and insight about the collection of moments that make up a life – the life of someone with an irrepressible need to write, of someone for whom art and the natural world are physical needs, of someone for whom death is always standing in the corner, of someone who craves solitude and love from the depths of his being.

Praise For My Struggle: Book Two: A Man in Love…

A 2013 Wall Street Journal Best Book of the Year

"What's notable is Karl Ove's ability, rare these days, to be fully present in and mindful of his own existence. Every detail is put down without apparent vanity or decoration, as if the writing and the living are happening simultaneously. There shouldn't be anything remarkable about any of it except for the fact that it immerses you totally. You live his life with him. . . . The overweening absurdity of Ove's title is a bad joke that keeps coming back to you as you try to construct a life worthy of an adult. How to be more present, more mindful? Of ourselves, of others? For others?" — Zadie Smith, The New York Review of Books

"The book investigates the bottomless accumulation of mysteries everyday life imposes. . . Knausgaard's approach is plain and scrupulous, sometimes casual, yet he never writes down. His subject is the beauty and terror of the fact that all life coexists with itself. A living hero who landed on greatness by abandoning every typical literary feint, an emperor whose nakedness surpasses royal finery." — Jonathan Lethem, The Guardian

"Knausgaard doesn't always present himself as father-of-the-year material, sweating how much time he'll have to research and write his second novel and squabbling with his family and fussy neighbors in the search for some peace and quiet. . . But his candor, if not his attitude, is admirable—he's not rationalizing his behavior but flatly, honestly representing it. A patient exploration of courtship and fatherhood stripped clean of politesse." — Kirkus Reviews (Starred Review)

"...reading My Struggle, you have the sense that Knausgaard has made a wonderful discovery, an almost scientific innovation. My Struggle is something new, something brave..." — n + 1

"It would not be an exaggeration to say that Karl Ove Knausgaard’s six-volume memoir “My Struggle” (Archipelago Books) — of which three volumes have been translated into English — has catapulted the Norwegian writer into the rarefied company of such authors as James Joyce, Marcel Proust and Henry Miller. These writers burst forth with a new consciousness and in so doing became the voice of their generation. Years hence we will be talking about Knausgaard’s incredibly detailed memoir cycle doing the same for the late 20th century." — The Providence Journal

"Knausgaard has written one of those books so aesthetically forceful as to be revolutionary ... The digressiveness of Sebald or Proust is transposed into direct, unmetaphorical language, pushing the novel almost to the edge of unreadability, where it turns out to be addicting and hypnotic. A man has written a book in which a man stays at home with his kids, and his home life isn’t trivialized or diminished but studied and appreciated, resisted and embraced. An almost Christian feeling of spiritual urgency makes even the slowest pages about squeezing lemon on a lobster into a hymn about trying to be good." --The Paris Review

"I read both books [One and Two] hungrily and find myself already missing Knausgaard just a few days after turning A Man in Love’s last page, searching the Web for inexpensive crash courses in Norwegian, mostly just wishing Volume Three were available in English now." —Jonathan Callahan, The Millions

"Achieves an aching intimacy, one that transcends the personal and makes Knausgaard’s pursuit of grand artistic ideals, his daily joys and misgivings, strangely familiar." —Time Out New York

"His work ranks as one of the most memorable reading experiences of my life. There has been, for me, nothing quite like it. Karl Ove makes me see better. I have not wanted his books to end because I have not wanted to unmerge with him. He writes of longing to be back in 'the maniacal, the lonely, the happy place' he achieved while writing. In my own maniacal, lonely happiness, away from the world for a time, away from the human pull, I found comfort in knowing that, despite his deep craving for distance and work, Knausgaard remains loyal to the human world, to being open to what it offers." — Nina MacLaughlin, L.A. Review of Books

"[T]he book sears the reader because Knausgaard is a passionate idealist and not just a tetchy complainer. He wants to create great art, and he wants to fight the conformity and homogeneity of modern bourgeois existence."   —James Wood, The New Yorker

"While not unconcerned with finding objective truth in the moments he recounts, Mr. Knausgaard aims first to simply record them, to try to shape the banal into something worth remembering. Beautifully rendered and, at times, painfully observant, his book does a superlative job of finding that 'inner core of human existence.' If his first volume was his struggle to cope with death, this is his struggle to cope with life."
— The Wall Street Journal

"Achieves an aching intimacy, one that transcends the personal and makes Knausgaard’s pursuit of grand artistic ideals, his daily joys and misgivings, strangely familiar." —  Time Out New York

"That something subtitled “Book 2” might be called the most interesting literary development of the year surprises me; also surprising to me is that something I feel comfortable terming “the most interesting literary development” includes a long section detailing the narrator’s attendance at “Rhythm Time,” a music class for infants. But Book 2 (of six) of the Norwegian writer Karl Ove Knausgaard’s 3,600-page autobiographical novel of family life, “My Struggle,” reveals that the tome grows only more substantive, comical and artistically singular as it proceeds." — Rivka Galchen, New York Times Book Review

"A masterpiece of staggering originality, the literary event of the century ... Life here and now, examined at a fever pitch, daily recollections recounted in exhausting but exhilarating detail." — Arlice Davenport, Wichita Eagle

"A six-volume literary experiment in which a contemporary Norwegian author describes his own life may sound dull. But Knausgaard's literary experiment is both brutally honest and far from dull. Trust me, it'll be worth waiting for volumes three through six to appear in English translation." — Jo Nesbo, in The Week (one of Jo Nesbo's six favorite books)

"Karl Ove Knausgaard continues to astound, with this second volume concentrating on his marriage and his art. Sometimes it’s marriage versus art, and that friction gives this book a terrific range of emotions. Conversations with his friends provide a good view into the different ways Norwegians and Swedes go about life. Is it fiction? Memoir? No one could remember verbatim the conversations recounted at length here, and that, too, is as fine a balancing act as Knausgaard’s depiction of himself as writer and father/husband." — Jeff Bursey, in Conversational Reading

"Quite simply this is one of the best novels ever written." — Tyler Cowen, professor of economics at George Mason University and co-author of the Marginal Revolution blog, in Bloomberg

"The way in which Knausgaard seeks to expose the dark, regressive aspects of his own character within the context of a life that is, in most respects, quite ordinary is precisely what allows these books to transcend their narrowly personal foundations."— Sydney Review of Books

"Volumes 1 and 2 of Karl Ove Knausgård's epic novel/memoir My Struggle (Harvill Secker) blew me away: totally immersive, collapsing the wall between author and reader as you live his life alongside him. It's somehow triumphant and redemptive – and powerfully addictive – even as it recounts the most apparently mundane aspects of life. He's a genius." — Simon Prosser, Publisher, Hamish Hamilton, in The Guardian

"Second in a six-volume magnum opus that Archipelago has bravely committed to bring us, this magisterial work gives us a character named Karl Ove Knausgaard who abandons his wife, moves to Stockholm, and discovers new love—and the travails of starting a new family." — Library Journal (Best Fiction in Translation 2013)

"Both Knausgaard’s Proustian style and the fact that his work is one long book stretched out into many volumes, just like In Search of Lost Time, should signal that it’s a literary event the likes of which we probably will not see again in our lifetimes. . . . Unlike almost every other work of art released in the 21st century, Knausgaard’s massive book is an ongoing cultural event that we’re being afforded the opportunity to savor." — Jason Diamond, Flavorwire

"...The structure of Vol 2 is intricate and fascinating ... Knausgaard strings out for the length of the entire volume this utterly hilarious and tabloid-level fascinating story ... the sort of an anecdote that Knausgaard tells like nobody else can. (Oh, and on that subject, the section where Knausgaard’s wife gives birth to their first child is simply AMAZING; it is long and drawn out and excruciating and simply shows realist writing at its very, very best. I think I almost fainted.)" — Scott Esposito, Three Percent

Karl Ove Knausgaard was born in Norway in 1968. His debut novel Out of This World won the Norwegian Critics Prize in 2004 and his A Time for Everything(Archipelago) was a finalist for the Nordic Council Prize. For My Struggle Book One, Knausgaard received the Brage Award in 2009, the 2010 Book of the Year Prize in Morgenbladet, and the P2 Listeners’ Prize. My Struggle has been translated into more than fifteen languages. Knausgaard lives in Sweden with his wife and three children.
Loading...
or support indie stores by buying on
(This book is on backorder)