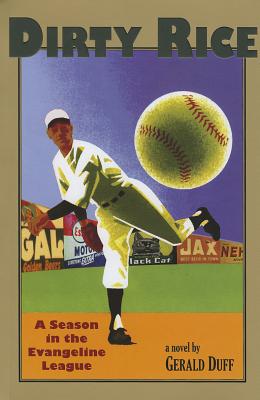 A Season in the Evangeline League

In the midst of the Great Depression, minor league baseball thrives in small-town South Louisiana, where the Evangeline League, named in honor of Longfellow’s heroine, draws hundreds to dirt fields and grandstands in places like Jeanerette, Abbeville, and Opelousas. In 1935 Gemar Batiste, a talented young pitcher from Texas, is recruited to try out for the Rayne Rice Birds, makes the roster, and immediately begins garnering fame for himself, his team, and the league.


But Gemar is not the same as his teammates and opponents, and his skills on the diamond cannot erase those differences. He grew up on a reservation in Texas, an Alabama-Coushatta Indian dreaming of hurling strikes in the big leagues. During his season with the Rice Birds, Gemar is asked to play the stereotypical Indian and enticed to cheat, which goes against his view of the diamond as a sacred place of honor. Constantly challenged as he tries to protect his identity as an Alabama-Coushatta and uphold the integrity of the game, Gemar—like the Evangeline League’s namesake—comes to embody loss, perseverance, and commitment.


Much like minor league baseball itself, the story of Gemar Batiste’s season in the Evangeline League is a work of satire, humor, tragedy, and triumph.


Praise For Dirty Rice: A Season in the Evangeline League…

“Native American plays the National Pastime right. What could go wrong? . . . . With wonderfully accurate detail, pitch-perfect dialogue, and a story that won’t let go, Duff shows exactly what can go wrong in the Evangeline Baseball League during the Great Depression. In Louisiana’s Hot Sauce League, some games get thrown, at times betting determines outcomes, but Gemar Batiste of the Alabama-Coushatta Nation plays to win and to keep his soul.”


“I am ready to believe that Gemar Batiste really existed, that he played and starred for the Rayne Rice Birds in 1935. In fact, I would be disappointed to learn that it all never happened. I am also ready to believe that the author played in the Evangeline League, so accurate and authentic is his stance and delivery. There is nostalgia of the best sort in this book, as well as humor, sadness, and a generous serving of Native American philosophy.”


“Gerald Duff’s Native American hero, Gemar Batiste, is to baseball what Huck Finn was to the Mississippi River . . . . Dirty Rice is so vividly imagined that it often feels like an honest-to-god memoir, with its precise and unflinching evocation of place and its treatment of men both good and bad whose one true gift to the world was how they played the game.”