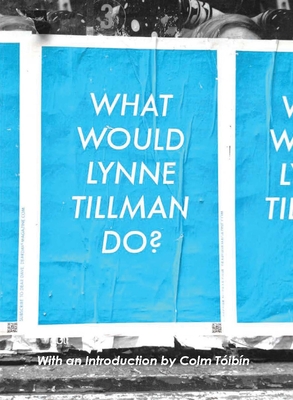 What Would Lynne Tillman Do?

Here is an American mind contemplating contemporary society and culture with wit, imagination, and a brave intelligence. Tillman upends expectations, shifts tone, introduces characters, breaches limits of genre and category, reconfiguring the world with the turn of a sentence. Like other unique thinkers, Tillman sees the world differently--she is not a malcontent, but she is discontented. Her responses to art and literature, to social and political questions change the reader's mind, startling it with new angles. Which is why so many of us who know her work often wonder: what would Lynne Tillman do? A long-time resident of New York, Tillman's sharp humor is like her city's, tough and hilarious. There are distinct streams of concern coursing through the seeming eclecticism of topics--Hillary Clinton, Jane Bowles, O.J. Simpson, art and artists, Harry Mathews, the state of fiction, film, the state of her mind, the State of the Nation. There is a great variety, but what remains consistent is how differently she writes about them, how well she understands, how passionate and bold her writing is. What does Lynne Tillman do? Everything. Anything. You name it. She has a conversation with you, and you're a better, smarter person for it.

Praise For What Would Lynne Tillman Do?…

"Lynne Tillman has always been a hero of mine not because I 'admire' her writing, (although I do, very, very much), but because I feel it. Imagine driving alone at night. You turn on the radio and hear a song that seems to say it all. That's how I feel...:" Jonathan Safran Foer

"Lynne Tillman's writing is bracing, absurd, argumentative, and luminous. She never fails to exhibit her unique capacities for watchfulness and astonishment." Jonathan Lethem

"Like an acupuncturist, Lynne Tillman knows the precise points in which to sink her delicate probes. One of the biggest problems in composing fiction is understanding what to leave out; no one is more severe, more elegant, more shocking in her reticences than Tillman." Edmund White

Praise for American Genius, A Comedy

What emerges here is a bold showcase of a novel, a cabinet of curiosity, a proposal for what fiction could be.” New York Times Book Review

To read Tillman’s tightly woven novel, which meshes inner and outer realms as well as past and present, is to enter into an intense relationship, a communion with another spirit, perhaps with some sort of genius. An involvement that, like all forms of heightened attention, be it friendship, love, hate, or pursuits intellectual or creative, is demanding and bewitching, harrowing and bemusing, revelatory and transforming.” Donna Seaman, Bookforum

Reading the novel is like entering a room crowded with peculiar portraits, all brilliantly drawn. The book is a consummate work, one that levels Western history with family dynamics, pet deaths, Manson family references, the Zulu alphabet, skin disorders, and the loss of memory that afflicts us both personally and as a nation. Tillman once again proves herself a rare master of both elegant and associative writing, urging us to enter the moment, which is all we have and simultaneously cannot keep.” San Francisco Bay Guardian

"If I needed to name a book that is maybe the most overlooked important piece of fiction in not only the 00s, but in the last 50 years, [American Genius, A Comedy] might be the one. I could read this back to back to back for years." Blake Butler, HTML Giant

Praise for No Lease on Life

"Confirms and enhances her reputation as one of America's most challenging and adventurous writers." Guardian

should be awarded a special Pulitzer for the most perfect use of the word moron” in the history of the American novel." Fran Lebowitz

[Elizabeth] neither recoils nor romanticizes She’s a character who stays with you after you put the book downa creature of occasional dark impulses, intermittent grumpiness and perennial willingness to pull up her socks and deal.” David Gates, The New York Times Book Review

"A book anyone concerned with urban life, women, or American culture, as it stumbles into the 21st century, must read." Sapphire

"Exquisite... To encounter a writer of Tillman's acute intelligence writing as well as this is a cause for real celebration." Independent (UK)

"Tillman describes much of the wearing, wearying routine of the city's daily life all that garbage, all those druggies and creeps and whores we've met in a million Letterman one-liners jammed into a scrawny crevice of land while the rest of America's so huge and airy and free. But Tillman's book is utopian precisely because it takes those things into account; because its heroine fantasizes about murdering all the morons’ not out of hate, but dignity and a social space, a civil space, actually civilian space.’ [Tillman] sprinkles the text with dozens and dozens of jokes... Who can't relate? Isn't every public-transportation-riding, rent-paying, law-abiding urban dweller about two or three knock-knock jokes away from homicide?” Sarah Vowell, Salon

"Richly surreal yet darkly humorous Tillman demonstrates her wit, superb observational skill, realism of representation, and verbal eloquence No Lease on Life is a meditation on the realness and the ridiculousness of daily living. Yet again, Tillman tackles issues on her terms, freshly reshaping traditional literary forms.” Donna Seaman, Booklist

"We first meet Elizabeth sitting at the window of her East Village apartment at 5 a.m. spinning gruesome revenge fantasies about the noisy hoodlums in the street . . . this novel [is] graced by flashes of bilious wit, a series of funny, inconsequential jokes and an appealingly loopy milieu." Publishers Weekly

As energetic and raunchy as a New York street.” San Francisco Chronicle

A terribly up-close and personal examination of urban angst and fury. It is also a funny, frightening, and utterly brilliant tour de force.” Bay Area Reporter

Darkly humorous . . . [the] New York that one doesn’t see on Seinfeld.” Library Journal

"In a society that increasingly deals with the unbearable by cleaning it’ up, by sweeping the streets and parks of the homeless and addicted, and/or stashing it’ away (in ghettos, prisons, etc.), No Lease on Life provides a straight-on view and acknowledgment of the unbearable, if not an acceptance. What Elizabeth collects keeps her from sleeping, drives her to thoughts of murder, and yet she [has] to be open ... like a window ... sometimes transparent, usually paradoxical, and always open to tragicomic views of life.’” Elisabeth Sheffield, Review of Contemporary Fiction

Lynne Tillman is the author of five novels, four collections of short stories, one collection of essays and two other nonfiction books. She has collaborated often with artists and writes regularly on culture. Her novels include American Genius, A Comedy (2006), No Lease on Life (1997), a New York Times Notable Book of 1998 and a finalist for the National Book Critics Circle Award; Cast in Doubt (1992); Motion Sickness (1991); and Haunted Houses (1987). Someday This Will Be Funny (2012) is her most recent short story collection. Her nonfiction books include The Velvet Years: Warhol's Factory 1965-1967, with photographs by Stephen Shore (1995); Bookstore: The Life and Times of Jeannette Watson and Books & Co. (1999), a cultural history of a literary landmark, and The Broad Picture, an essay collection. Colm Toibin lives in New York City.
Loading...
or support indie stores by buying on