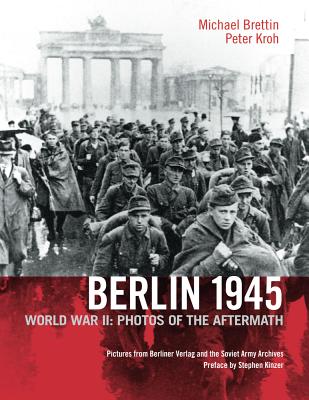 These rare pictures from post-war Berlin have been taken by photographers of the Soviet Army and by Germans in their employ immediately after the surrender and in the months to follow. A city reduced to rubble, and now under martial law, is imposed by the victorious Communists. And now, broken tanks and makeshift barricades are littering the streets, tenements and churches are turned into bombed-out shells, tunnels are flooded and train tracks destroyed. German soldiers have been hauled off to POW-camps in Siberia, while old men are cutting up dead horses for food, women are trading clothing for survival, and children are left to their own devices in the ruins. Published for the first time in the United States, this collection allows a glimpse into an era of destruction and desperation, but also of survival and rebuilding.  The preface was written by Stephen Kinzer, the former bureau chief of The New York Times in Berlin.

Praise For Berlin 1945: World War II: Photos of the Aftermath…

"We see it all: the unfathomable rubble, the homeless and the hungry, the German soldiers marched off to prison camps. And then: the beginnings of recovery and return of the human spirit. Even if you think you’ve seen it all before on the European war, Berlin 1945 is likely to surprise you."  —Greg Mitchell, blogger, The Nation

"These photos depict a grotesque normalcy, beyond the well known iconography of heroic liberations and optimistic rebuilding."  —Der Spiegel Online

"At times eerie and at times prosaic, the photographs, many taken by victorious Soviet Red Army soldiers, show ordinary people doing extraordinary things in order to rebuild their lives, literally and figuratively, amid the ruins of a defeated city."  —Jason Walsh, correspondent, Christian Science Monitor

"These never-seen pictures of Berlin in ruins are so forceful, because for those Berliners, destruction was an everyday experience. This view of history does not leave anybody untouched. untouched."  —Literaturmarktinfo.de

"A veritable gold mine of historical and, above all, photographical treasures, with something for everyone in this book, and everything in it, from death to birth, from joy to sadness, from optimism to resignation." —Luke McCallin, author, The Man from Berlin

Dr. Michael Brettin is the managing editor of the Sunday issue of Berliner Kurier. His writings on the history of the Berlin Wall have been published in twelve installments and as a magazine. He lives in Berlin. Peter Kroh, is a former photo reporter and editor who worked German newspapers such as Berliner Kurier, Junge Welt in Berlin and Thüringer Allgemeine. He lives in Berlin. Otto Donath was a photographer for the Soviet army and then for magazines in East Berlin, among them Für Dich and Neue Berliner Illustriete.
Loading...
or
Not Currently Available for Direct Purchase