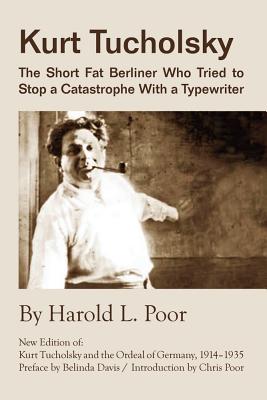 Harold L. Poor’s biography of the iconic German Jewish author, journalist, satirist, playwright, and poet is the most important and thorough work on Kurt Tucholsky in the English-speaking world—a labor of love by the Rutgers history professor that is still unmatched. For this book, Poor has not only spent years of research in American Universities, he also visited Tucholsky’s widow Mary Gerold in her home in Germany, his family in tow, and unearthed materials, letters, and pictures that had previously been unpublished. This book is an entertaining and well-written gem that has finally been rediscovered.

Praise For Kurt Tucholsky: The Short Fat Berliner Who Tried to Stop a Catastrophe With a Typewriter…

“Harold L. Poor’s study is one of the best of a large and growing crop.”  —The New York Times

“The book does offer an introduction to a very important period and a witty, cosmopolitan, quite tragic man.”  —Kirkus Reviews

“This biography, the first substantial treatment of its subject in English, does an excellent job of analyzing Tucholsky’s Hassliebe for Germany.”  —The American Historical Review

“Poor has placed the brilliant satirist in the context of the history of his country . . . a meticulously researched, copiously annotated study.”  —The Germanic Review

“[An] academic exercise of the sort Tucholsky himself prophetically anticipated in his Plea Against Immortality.”  —Commentary Magazine

“Poor has provided a new focus of the Weimar Republic and its fate.“  —The New York Review of Books

“This one was well worth doing and it is well worth reading.”  —The German-American Review

“A readable orientation to the history of the Weimar era.”  —Richmond News Leader

Harold Poor studied German and European history at Columbia University. In 1966, he came to the Rutgers College History Department where he taught and administered until his premature retirement in 1991, after being diagnosed with AIDS. He died on January 24, 1992. One of the most gifted and charismatic teachers in the History Department, Poor's courses ranged widely over German and European history. He pioneered in the teaching of gay history with his course on "History and the Homosexual" in the fall of 1984. He was also the co-author of a music drama Tickles by Tucholsky, which was first produced at Brandeis University and then off Broadway at Theater Four in 1976. From 1981 through 1983, he served as the national Chairperson for the Committee on Lesbian and Gay History, an affiliate of the American Historical Association. Belinda Davis is Professor of History at Rutgers University and Director of the Rutgers Center for European Studies. Her most recent book is The Inner Life of Politics: Extraparliamentary Opposition in West Germany, 1962-83. Chris Poor is the son of Harold L. Poor. He lives in Eugene, Oregon, where he works as an Employment Specialist.
Loading...
or support indie stores by buying on