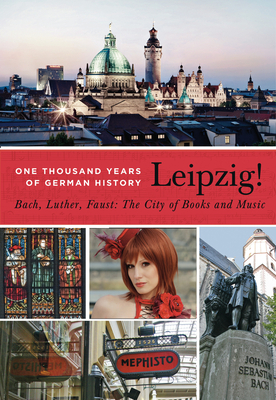 One Thousand Years of German History - Bach, Luther, Faust: The City of Books and Music

Bringing to life the stories of the ordinary and famous Leipzigers, this book takes readers through the 1,000-year-old history of the city of books and music. This book contains a rich history of Leipzig, from St. Thomas Church where Johann Sebastian Bach composed his cantatas to Martin Luther’s dispute of the future of Christianity at Germany’s second oldest university to the rallies at the St. Nicholas Church that led to the downfall of Communism. Located at the meeting point of historic imperial roads, Leipzig is also the site of one of the world’s oldest and largest book fairs. A sweeping overview, this book highlights the famous stories of what is now a splendidly rebuilt city.

Praise For Leipzig!: One Thousand Years of German History - Bach, Luther, Faust: The City of Books and Music…

Sebastian Ringel is a Leipzig novelist who grew up in a small town in Saxony. He studied history in Dresden, where he also became an occupational therapist. His first novel, The Monotony of Yeah, Yeah, Yeah came out in 2002, followed by a collection of stories and poems, My Dog the Fish. His latest novel, 5.8 People was inspired by a year-long sojourn in Australia. In addition to writing, he works as a tour guide in Leipzig.
Loading...
or
Not Currently Available for Direct Purchase