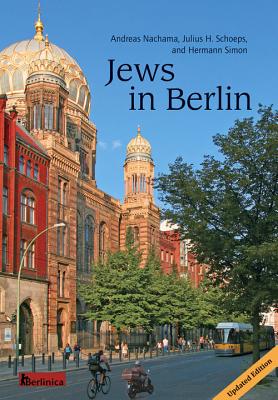 This richly-illustrated book depicts 750 years of Jewish history as well as Jewish life in Berlin today. The Prussian capital was, for many centuries, the center of Jewish life in Germany. Its Jewish citizens strongly influenced the city’s cultural and literary life and led the way in the sciences, from the 18th century salon of Rachel Varnhagen to the cabarets of the Weimar Republic. However, economic crisis, hyper-inflation, and the depression of 1929 provided rich soil for the growth of anti-Semitism and ultimately led to the Holocaust. Today, after tens of thousands of immigrants from Russia and Israel have arrived in the capital, Jewish life and culture are flourishing once again.

Praise For Jews in Berlin: A Comprehensive History of Jewish Life and Jewish Culture in the German Capital Up To 2015…

“Finally, a comprehensive book on the history of Jews in Berlin has arrived! Never has there been such a complete overview—supported by wonderful illustrations."  —Berliner Zeitung

“[Jews in Berlin] offers an outstanding and thorough overview of more than seven centuries of Jewish life in Berlin . . . An indispensible read on Berlin’s cultural history.”  —Portal Kunstgeschichte

“[Jews in Berlin] presents centuries of history of Jewish life in Berlin as a vivid and comprehensive impression of development, illustrated by a richness of documents, profiles, and images."  —Katholische Kirchenzeitung

Andreas Nachama is an ordained rabbi and the executive director of the Topographie of Terror Foundation. He has served as head of the Berliner Festspiele, the chairman of Berlin’s Jewish community, and as the artistic director of the Jüdische Kulturtage. Julius H. Schoeps is the founding director of the Vienna Jewish Museum and a professor of modern history at the University of Potsdam, where he also directs the Moses Mendelssohn Center for European Jewish Studies. He is the author of A Road to Nowhere, Salomon Luwig Steinheim, and Theodor Herzl 1860-1904. Hermann Simon is the director of the New Synagogue Berlin – Centrum Judaicum Foundation, and directed the reconstruction of the New Synagogue as Centrum Judaicum. He is the author of Hidden Champions of the Twenty-First Century and Manage for Profit, Not for Market Share. They all live in Berlin.
Loading...
or
Not Currently Available for Direct Purchase