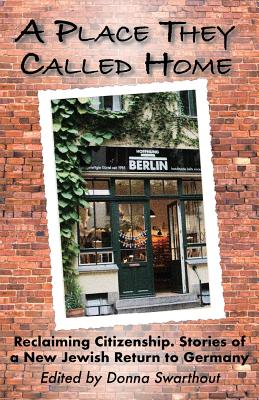 A Place They Called Home

Reclaiming Citizenship. Stories of a New Jewish Return to Germany

This book gives a voice to the descendants of Jewish Holocaust survivors who have chosen to restore their German citizenship. Dena, a New Hampshire retiree, feels at home in Germany the moment the vineyards across the Rhine come into her view. Maya, a journalist for Deutsche Welle, pursued German citizenship to boost her career in Berlin. And Yermi, an Israeli writer, has a response for people who question his decision to live in the country that murdered his relatives. They each have different reasons for doing so, but they all reclaimed something that was taken from their families.

Praise For A Place They Called Home: Reclaiming Citizenship. Stories of a New Jewish Return to Germany…

“Donna Swarthout has collected personal stories reflecting a quite unexpected phenomenon: descendants from formerly persecuted German-Jewish families are reclaiming German citizenship. These men and women have moved forward from their tragic past though they carry the pain and grief of their parents and grandparents with them. They trace their roots back to the country of Goethe and Einstein, recapturing family legacies and discovering a new Germany. Will present-day Germany become ‘a place called home’ for these individuals too? The answer is left open.”  —Julius H. Schoeps, chair of the Moses Mendelssohn Foundation

“Inspiring and gut-wrenching. These deeply personal accounts of a modern Jewish generation struggling to re-establish family roots in a new Germany while paying honor to their martyred forebears tell a timeless tale of human redemption—the homecoming.”  —Ralph Blumenthal, journalist and author of Miracle at Sing Sing

“Donna Swarthhout’s book opens minds to a difficult history while tugging at your heartstrings.”  —Eugene DuBow, Founding director of the AJC Berlin

“This book offers the reader a compelling view of a better and hopefully more peaceful future between Germans and Jews.”  —Sharon Adler, publisher at AVIVA-Berlin.de

“An important facet of the history of the special relationship of Jews to Germany.”  —Lorenz S. Beckhardt, author of Der Jude mit dem Hakenkreuz

Donna Swarthout was born in New Jersey to German Jewish parents from Frankfurt and Hamburg. She holds a Master’s degree in political science from the University of California, Berkeley and has twenty years of experience teaching at universities in the U.S. and Germany. In 2010 she moved to Berlin from Bozeman, Montana with her husband and three children. She is the author of numerous publications and the blog “Full Circle” about her return to Germany. Pippa Goldschmidt is a writer based in Edinburgh, Scotland. She used to be an astronomer and much of her work is inspired by science. She’s the author of the novel The Falling Sky and the short story collection The Need for Better Regulation of Outer Space. Her work has been on BBC Radio 4 and published in a variety of places including the Scottish Review of Books, The Times Literary Supplement, and The New York Times. Maya Shwayder is a journalist originally from Detroit. After graduating from Harvard and Columbia Journalism School, she now lives in Berlin working for an international TV broadcaster as an anchor and a correspondent. As a journalist, she has covered topics ranging from LGBT civil rights to the United Nations and the U.S. health care crisis. Rabbi Kevin Hale is a Sofer (Torah scribe) engaged in the writing, restoration and appraisal of Torah scrolls and related Judaica based in Massachusetts. In 2013–14 he wrote a mezuzah for the Auschwitz Jewish Center’s Café Bergson in Oswiecim, Poland. An amateur luthier and historian, he serves on the board of his local historical society, the cemetery committee of his synagogue, and as chaplain of his local Masonic Lodge. Sally Hess, a native New Yorker and award-winning Ballroom dancer began her career as The Child in Doris Humphrey’s Day on Earth. She has performed with many choreographers, created work for her own Dancetales / Récitsdanses, and has taught worldwide. She holds degrees in Philosophy and French Literature from Barnard College and Yale University and was an Instructor at Princeton University and Associate Professor at Swarthmore College. Peter B. Meyer, born and raised in New York City, is President and Chief Economist of the E.P. Systems Group, Inc., and Professor Emeritus of Urban Policy and Economics and Director Emeritus of the Center for Environmental Policy and Management at the University of Louisville. He has worked extensively on European as well as U.S. economic development and environmental public policy matters and continues active collaboration with German colleagues. Sylvia Finzi  is a sculptor and installation artist, born in the U.K. to a German Jewish mother and an Italian Jewish father. She divides her time between Berlin and London. She’s had several one-person exhibitions (including in 1979 at the Goethe Institute in Paris). Her work was included in several public as well as private collections. She’s taught in Germany, England and the Middle East and now also works supporting refugees. Yermi Brenner was born in 1980 in Israel, grew up on a kibbutz, and has been living in Berlin since 2014. He works as a freelance journalist. His articles, personal essays and video stories have been published by various news organizations, including Al Jazeera, The Jewish Daily Forward, and Huff Post. Yermi’s has reported extensively on the arrival of asylum seekers in Europe and integration of refugees in Western societies. Ruth White, born in 1944, is the daughter of German Jews who fled Germany in 1936. Ruth and her husband Alan live in Berkeley, California. Retired after a forty-year career as a clinical psychologist, Ruth enjoys singing, yoga, studying Italian, and gardening. Dena Rueb Romero, a retired social worker, lives in Hanover, New Hampshire, where she was born in 1948. She sings in a women’s chorus and is an active contributor in a bi-monthly writing group. She is currently writing her family story. Formerly married to a Peruvian, she lived in Lima, Peru, for two years and has Peruvian citizenship. Carole Fabian was born in 1960 in Melbourne, Australia. Her father Garry (Gerhard) Fabian was born in 1934 in Stuttgart. Garry and his parents were interned in Theresienstadt concentration camp, Czechoslovakia, from 1941–45. They migrated to Australia in 1947. Nancy R. Krisch was born in New York to German Jewish parents from Berlin. She is now an American expat living in Cape Town, South Africa. Nancy has been actively engaged with her local Jewish community in both professional and volunteer capacities, in Philadelphia, West Hartford (Connecticut) and now Cape Town.
Loading...
or support indie stores by buying on