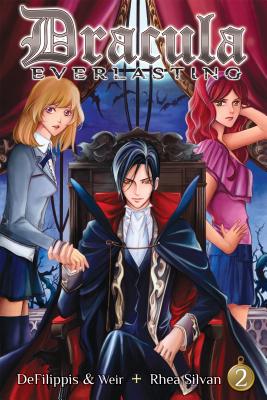 In this all new "shoujo "manga series, Seven Seas is pleased to present a contemporary spin on the world's most famous vampire, Dracula. "Amazing Agent Luna "writers Nunzio DeFilippis and Christina Weir team up with artist Rhea Silvan to deliver a beautifully illustrated ongoing vampire series that expands on the Dracula mythos like never before.

Nicholas Harker discovered he is heir to the legacy of an ancestor he never knew he had: Dracula. Under his progenitor's evil influence, Nichalas has begun, with a vast fortune at his disposal, to rebuild Castle Dracula in the outskirts of Boston, leaving behind a wake of corpses.

While the love of Jill Hawthorne seems to be the only thing that weakens Dracula's hold over Nicholas, Mason Renfield realizes he must remove her from the picture, in order to usher in the full reemergence of his dark lord. But Jill's new friend, the fierywiccan Cate, has plans of her own to destroy Nicholas and avenge her mother's death.

Nunzio DeFilippis & Christina Weir are a husband and wife writing team who have worked in television on HBO's Arli$$ and Disney's Kim Possible. As veteran comic book writers, they have written such series as New Mutants and New X-Men, and numerous manga and graphic novels. They live in Southern California.Rhea Silvan is a manga artist whose works include InVisible, Winter Demon volume 4, and contributions to Watson Guptill's "How To Draw" series.

"The artwork is incredible and the story moves at a great pace." —VAMPIRES.COM