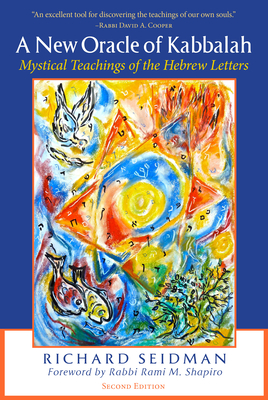 A New Oracle of Kabbalah

Mystical Teachings of the Hebrew Letters

The Hebrew word for "letter," -- ot -- also means "sign" or "wonder" or "miracle." For thousands of years, Jewish sages have taught that the letters of the Hebrew alphabet embody miraculous powers. According to the earliest known book on Jewish mysticism, The Sefer Yetzirah (The Book of Creation), written more than 15 centuries ago, God formed the entire universe by speaking aloud the 22 letters. These letters are the building blocks of creation. They are also archetypes. Each one expresses a specific primordial power or creative energy. A New Oracle of Kabbalah makes ancient teachings about the Hebrew letters accessible and practical for contemporary readers. Author Richard Seidman describes the traditional meanings associated with each letter, and, using a deck of cards that they can easily create or purchase separately, readers learn how these teachings apply to their own lives and respond to the questions they bring to the oracle. A New Oracle of Kabbalah is grounded in traditional and mystical Judaism. At the same time, Seidman incorporates writings and teachings from a variety of religious and cultural paths to provide perspective on the materials. The result is a book that is deeply Jewish but not narrowly so.

Richard Seidman is a long-time student of Jewish mysticism, an environmental activist, the holder of a black belt in shotokan karate, and a children's book author (World Cup Mouse). He has worked as a technical writer, college writing instructor, janitor, farm hand, and ice cream pushcart vendor. He lives in Ashland, OR.
Loading...
or
Not Currently Available for Direct Purchase