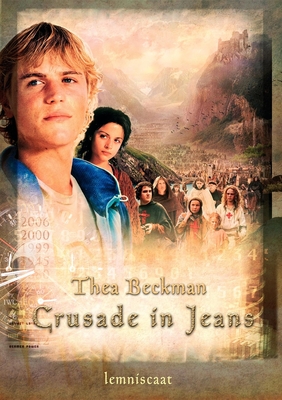 Fifteen-year-old Dolf uses a prototype time machine and gets stuck in the Middle Ages. Trying to find his way back to the twentieth century, he joins a children's crusade of almost ten thousand children on their way to the Holy Land. Dolf helps the children defy the terrible mountains, conquer disease and fight evil knights. Slowly, Dolf begins to realize that the real danger does not lurk behind the next mountaintop, but rather within the crusade itself. Crusade in Jeans was first published in 1973. It became an overnight success, making Thea Beckman one of the most popular authors of juvenile books in Europe. In 1974, Crusade in Jeans was awarded The Golden Pen (the most prestigious Dutch national award for children's books). In 1976, the Province of Trento, Italy, named it the Best European Historical Juvenile Book. In 2006, the book was turned in an award-winning movie picture featuring Emma Watson, Michael Culkin, Joe Flynn and Stephanie Leonidas. Awards included top honors at Toronto Sprockets (2008) and the Children's Jury Award at the Chicago International Film Festival (2007).

Thea Beckman (1923-2004) was born in Rotterdam. She began writing in 1947, but it was not until her children were grown that she devoted herself to writing full time. Ms. Beckman was fascinated by history and wrote books about many historical periods ranging from the Middle Ages and extending into to the future.
Loading...
or
Not Currently Available for Direct Purchase