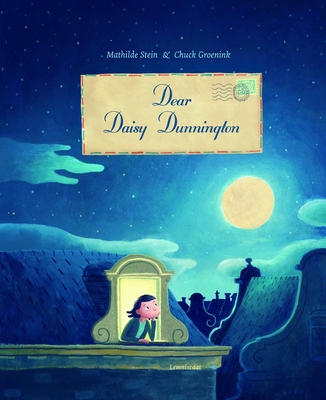 Poor Daisy Dunnington is her demanding mother's drudge. But then one day an unexpected letter drops on the doormat addressed to her. What can it be? Who can be writing to her? Perhaps it's from the queen's servant, explaining that she is really a princess, or its it from a movie producer, inviting her to play the lead role in his next film? As Daisy dreams all the possible lives she could have, she makes up her mind. Without even opening the letter, she leaves, heading for a more colorful future. Dear Daisy Dunnington is a book full of imagination and hope.

Mathilde Stein (1969) born and raised in The Netherlands, studied at the Arts Academy in France. After living in France for ten years, she moved to the United Kingdom, where she works as Course Director and Senior Lecturer Event management at the University of Central England.Chuck Groenink (1982) graduated in 2004 from The School of Arts in Kampen. He published his first comic book in 2007, competing in the Belgium comic book contest Het Salon. At the age of 25 he won the Fiep Westendorp Stimulating Award for young promising illustrators. He lives in Portland. Dear Daisy Dunnington is his first picture book.
Loading...
or support indie stores by buying on