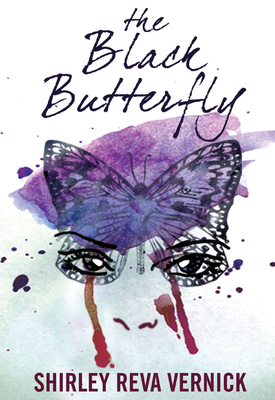 Penny is furious, and who can blame her? She has to spend Christmas break alone at the Black Butterfly, an old inn at the coldest, bleakest edge of America--the coast of Maine. This "vacation" is the brainchild of Penny's flaky mother, who's on the other side of the country hunting ghosts. Penny most definitely does not believe in spirits. Or love. Or family. Until, that is, she discovers two very real apparitions which only she can see...and meets George, the handsome son of the inn's owner...and crashes into some staggering family secrets. If only Ghost Girl didn't want Penny dead. If only George were the tiniest bit open to believing. If only she could tell her mother. Then maybe this could still be a vacation. But it's not. It's a race for her life, her first love, and her sanity.

Shirley Reva Vernick is rapidly becoming the new hot item in young adult fiction. Her first novel, The Blood Lie, won the Simon Wiesenthal Children's Book Award, was silver medalist for the Sydney Taylor Book Award, and was an ALA 2012 Best Book for Young Adults. Her second novel, Remember Dippy--a feel good adventure about a fourteen-year-old boy shepherding his older autistic cousin through his summer vacation--was released in spring 2013 and won the Dolly Gray Literature Award from the Council For Exceptional Children. This time around, Shirley wanted to let loose with a page-turning coming-of-age romance mixed with ghosts and adventure. Shirley is the creator of the much visited storytelling website storybee.org. She lives in Amherst, Massachusetts.

Shirley Reva Vernick's interviews and feature articles have appeared in "Cosmopolitan, Good Housekeeping, Ladies' Home Journal, " national newspapers, and the publications of Harvard, Johns Hopkins and Boston Universities. She also runs a popular storytelling website, storybee.org, which is used in schools, libraries, hospitals and homes all over the world. Shirley graduated from Cornell University, majoring in economics and nutrition, and is an alumna of the Radcliffe Writing Seminars. Her first novel, "The Blood Lie," won the Simon Wiesenthal Once Upon a World Children's Book Award; was a Skipping Stone Honor Book; won the Langum Prize for American Historical Fiction, Director's Mention; was the silver medalist for the Sydney Taylor Book Award; and was listed by the ALA for the 2012 Best Fiction for Young Adults. Her second novel, Remember Dippy, came out in Spring 2013. This is her third novel for young adults. She lives in Amherst, Massachussetts.
or
Not Currently Available for Direct Purchase
Copyright © 2020 American Booksellers Association