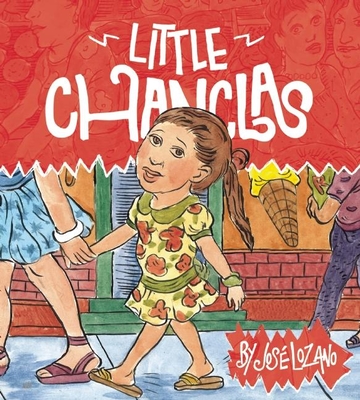 A bilingual tale about Little Lilly Lujan who loves her chanclas (flip-flops) going slippety-slappety and flippity-flop. In fact, Lilly refuses any footwear except her favorite pair of flip-flops. Why does Lilly love her chanclas so much? her family cries. Lilly doesn't listen. That's why her family nicknames her Little Chanclas. At baptisms, barbecues, quince eras, and picnics, you can hear Little Chanclas going slippety-slap and flippity-flop. Then one day Lilly dances a little too much at a fiesta, her chanclas come apart, a pit bull chews up the remains, and there is no more flip for her flop Little Chanclas is inconsolable. Crisis ensues as she rejects shoe after shoe. But then a miracle happens. Lilly puts on a pair of soccer shoes. She's a natural. She goes clickety-click. She scores a goal. She's a star

Jos Lozano is a rising star in the thriving Latino art scene in Los Angeles, California. Born in Los Angeles, his family moved to Ju rez, Chihuahua, M xico, when he was a baby. Growing up on the border, he found many of the cultural touchstones that continue to influence his work today--bad Mexican cinema, lucha libre, fotonovelas, ghost stories, and comic books. Lozano prefers to work in a series, focusing on themes like Mexican wrestlers, paper dolls, and loter a. In fact, the Los Angeles Metro System commissioned his loteria card portraits of various light rail riders for the La Brea/Expo Station. Lozano lives in Fullerton, California, and teaches elementary school in Anaheim.