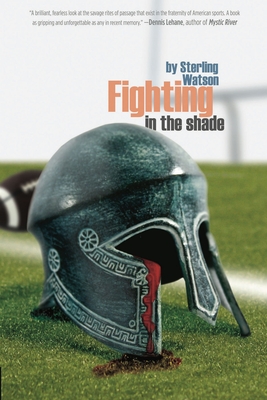 Fighting in the Shade

High school football mixes with Faust in this blitz of a novel from Watson . . . a big Dennis Lehane-like story of society, opportunity, and consequences, revealing Watson as an accomplished storyteller.
--Publishers Weekly, Starred Review Honor, loyalty, even life and death form the core of this wrenching story.
--Kirkus Reviews, Starred Review Watson's visceral descriptions of the physicality of sport are more than matched by his knowing depiction of small-town corruption in this fast-paced coming-of-age story.
--Booklist A sleeper that sneaks up on you. Pitch it to old school readers who appreciate intelligent and hard-hitting novels that are more than sports books.
--Library Journal Fighting in the Shade is less a sports novel than a coming-of-age story wound around a mystery, with football as symbol and symptom.
--St. Petersburg Times A brilliant, fearless look at the savage rites of passage that exist in the fraternity of American sports. A book as gripping and unforgettable as any in recent memory.
--Dennis Lehane, author of Mystic River In 1964, seventeen-year-old Billy Dyer is a newcomer to Oleander, a Gulf Coast Florida town whose old guard define football as the ancient Spartans did their Agoge. It is a mode of brutal tutelage that forges the hearts and minds of the town's elite youth for a future of power. Billy's parents are recently divorced and he lives in a bad neighborhood with his secretive, alcoholic father. Through the brutal and fiery days of summer practice, Billy fights for a starting spot on the team, the Spartans. He makes the team, but in a horrific hazing scene far from the town, he rebels and in the process badly injures his rival for the flanker position. The events that follow force Billy into exile from football, then later back into the game when powerful men realize that the Spartans cannot win without him.

Sterling Watson is the author of five novels, including The Calling, Sweet Dream Baby, and Weep No More My Brother, which was nominated for the Rosenthal Award given annually by the National Academy Institute of Arts and Letters. His short fiction and nonfiction have appeared in Prairie Schooner, the Georgia Review, the Los Angeles Times Book Review, the Michigan Quarterly Review, and the Southern Review. He is director of the Creative Writing Program at Eckerd College and holder of the Peter Meinke Chair in Literature and Creative Writing.
Loading...
or
Not Currently Available for Direct Purchase