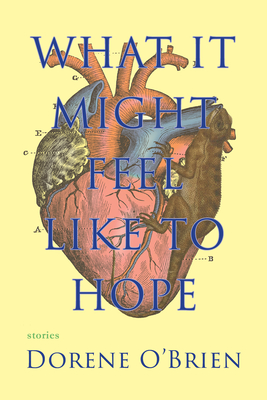 What It Might Feel Like to Hope, the second collection from award-winning author Dorene O'Brien, is a masterful and eclectic mix of stories that considers the infinitely powerful, and equally naive and damning force that is human hope. A couple tries to come to terms with one another as they travel west in the uncomfortable twilight of their youth; a mortician and an idealistic novelist spar about the true nature of death; an aspiring author hopes to impress Tom Hanks with zombies; a tarot reader deals out the future of Detroit. Showcasing her diverse talents, O'Brien offers a panoply of characters and settings that dwells beyond the borders of certainty, in a place where all that has been left to them is an inkling of possibility upon which they must place all their hopes. These stories offer a variety of tones, forms, and themes in which O'Brien displays an amazing range and control of her craft, all while exploring the essential nature of humanity with nuance, empathy, and at times a touch of skepticism.

Dorene O'Brien is a Detroit-based writer and teacher whose stories have won the Red Rock Review Mark Twain Award for Short Fiction, the Chicago Tribune Nelson Algren Award, the New Millennium Writings Fiction Prize, and the Wind Fiction Prize. Her story, "#12 Dagwood on Rye," was chosen by writer and fiction judge Jim Crace from among 4,000 entries as first-place winner of the international Bridport Prize. She has earned fellowships from the NEA and the Vermont Studio Center. Her stories have been nominated for two Pushcart prizes, have been published in special Kindle editions and have appeared in The Best of Carve Magazine. Her work also appears in Madison Review, Short Story Review, The Republic of Letters, Southern Humanities Review, Detroit Noir, Montreal Review, Passages North, Baltimore Review, Cimarron Review, and others. Voices of the Lost and Found, her first fiction collection, was a finalist for the Drake Emerging Writer Award and won the USA Best Book Award for Short Fiction. Her second collection, What It Might Feel Like to Hope, was first runner-up in the Mary Roberts Rinehart Fiction Prize.
Loading...
or support indie stores by buying on