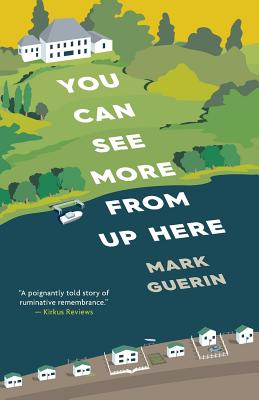 You Can See More From Up Here

""I was captured from the first sentence...superbly written" — Midwest Book Review

“A book about power, race, privilege and the failings we inherit”— Michelle Hoover, author of Bottomland


In 2004, when middle-aged Walker Maguire is called to the deathbed of his estranged father, his thoughts return to 1974. He'd worked that summer at the auto factory where his dad, an unhappily retired Air Force colonel, was employed as plant physician. Witness to a bloody fight falsely blamed on a Mexican immigrant, Walker kept quiet, fearing his white co-workers and tyrannical father. Lies snowball into betrayals, leading to a life-long rift between father and son that can only be mended by the past coming back to life and revealing its long-held secrets. You Can See More From Up Here is a coming-of-age tale about the illusion of privilege and the power of the past to inform and possibly heal the present.


Praise For You Can See More From Up Here…

In this novel, author Guerin beautifully captures the powerful contradictions of the relationship between father and son, which combines elements of friendship and antagonism. The author only gradually discloses Walker's epiphanies about his dad, which not only transform the protagonist's personal opinion of him, but also the future arc of his own life. The prose is confident and confessional throughout, and Guerin draws the reader into the compelling story by having Walker unflinchingly reveal his sense of disappointment in himself. Like the journalist he is, Walker clamors for the truth, whether it's consoling or not. A poignantly told story of ruminative remembrance.— Kirkus Review

I was captured by Mark Guerin's You Can See More From Up Here from the first sentence. The relationships in reporter Walker McGuire's life are gradually amped up in an engaging way as is the suspense. The reader has ample opportunity to bond with each character as they are well-delineated. The prose is superbly written...This book shows the long-lasting fall-out from toxic relationships, alcoholism, and child abuse, yet the villains are as finely drawn as the protagonist. Guerin unpeels the American psyche like an onion, exposing race relations, and immigration (legal and illegal), class and socioeconomic differences that, unfortunately, still exist. He also weaves together the past and the present seamlessly with an astonishing twist that ties everything together.
— Midwest Book Review

Mark Guerin’s fully-realized debut novel asks important questions about how little of our lives — and the relationships, incidents, and structural forces that form them — we allow ourselves to see. This is a sensitive, clear-eyed, unsentimental story about flawed people who compel us to look more closely at their choices as well as our own. — Christopher Castellani, author of Leading Men

A fellow writer often hesitates before reading new work by a friend — will I find something nice to say? Please let it be good! — but only a few lines of Mark Guerin’s exquisite, elegant, compelling prose removed all hesitation and paved my way to an extremely satisfying read. What a pleasure to discover a fresh new novelist in an old friend. In You Can See More From Up Here, Mark Guerin captures with evocative clarity both a unique time and place in American life and the complex emotional bonds of family and community that can tear and heal over a lifetime. It’s rare and exciting to find such self-assured prose, raw honesty and unwavering momentum in a first novel. I just loved it. For anyone who has struggled with identity, purpose, integrity, righteousness and self-doubt in the face of an overbearing parent, You Can See More From Up Here offers familiarity, clarity, and for all of the complex emotions explored, a sense of satisfaction.— Danny Rubin, writer of the movie and Broadway musical, Groundhog Day

You Can See More From Up Here does what all great novels do, smartly evoking a forgotten time and place, tugging at the heart strings of our seemingly innocent desires and relationships, and forcing us to confront our culpabilities as a protagonist confronts his own. On the surface, this is a book that explores a troubled relationship between father and son, but it is also a book about power, about race, privilege and the failings we inherit. Guerin achieves all this with great tenderness and an impressive command of story and time. What we see at novel’s end are the far-reaching consequences of what originally seems a simple but regrettable act. — Michelle Hoover, author of Bottomland

Guerin skillfully navigates the twist of familial bonds as a father and son confront distrust, lies, and unspoken expectations. Racial clashes and economic disparity compound their struggles making for an intense and satisfying novel. The structure of short, present-tense chapters mixed with longer past-tense ones worked beautifully, tickling my anticipation and constantly luring me forward, maintaining suspense.
— Liz Moore, author of Stones in the Road

In Mark Guerin's You Can See More From Up Here, a nineteen-year-old and his father face up to a conflict of generational ideologies when a workplace incident sends reverberations through their small town. Alternating between a summer [in 1974] and winter thirty years later, as Walker sits at his dying father's bedside, the book examines the dichotomy of a strict father and his conscientious son, both products of their respective times. Its mood is retrospective at first, as Walker reconciles his dying father with the disciplinarian he knew. Sections from the past soon envelope the book, though, and are meticulous and absorbing in their details. The characters and settings shape each other, and tension among characters results in the suspense that propels the story. Foreshadowing connects one chapter to the next. By working toward doing the noble thing and making amends, Walker helps his father confront his own internal dilemmas. The book's end is cathartic, bringing all of the emotional subplots to a head. Racial issues are handled with honesty. Mark Guerin's debut maneuvers through heartbreak with grace, navigating family expectations, a community's pervasive racism, and how peoples' actions shape others' opinions. — Forward Reviews

You Can See More From Up Here is an achingly real and thought-provoking novel about a son's quest to understand his troubled father and the long-ago summer that changed both of their lives. Alternating between 1974 and 2005, this novel vividly evokes the toxic behavior that keeps fathers from making genuine emotional connections with their sons, and the violence and bigotry lurking beneath the surface of a seemingly normal family in a bygone era (that is sadly not all that different from our own). Its unforgettable characters will leave you reflecting on your own family and the power of the past to shape the present, long after you've finished turning the pages.
— Emily Ross, author of Half in Love with Death

A powerful father's looming presence fills every page of You Can See More From Up Here, Mark Guerin's stirring debut novel about the past's ineluctable presence in the present.  With a steady hand, Guerin excavates the snarled roots of a dysfunctional family, the corrosive effects of class conflict, and the deeply buried lies that only a novelist of great scope and insight can bring into the revivifying light of day.
— Michael Antman, book and theater critic, author of Everything Solid Has a Shadow and Cherry Whip

Toggling between 1974 and 2005, this heartfelt, haunting, and beautifully told coming-of-age story explores the complexities and long-lasting residues of an unresolved father-son relationship, while also exploring class and race differences that resonate in today's America. You Can See More From Up Here will stay with you, prodding you to consider how your own path has been shaped by your perceptions of reality and how complicated the truth can be, even from a good vantage point.
— Belle Brett, author of Gina in the Floating World

Mark Guerin is a graduate of Grub Street’s Novel Incubator program in Boston. He has an MFA from Brandeis University and is a winner of an Illinois Arts Council Grant and the Mimi Steinberg Award for Playwriting. Originally from northern Illinois, Mark currently lives in Maine with his wife and two Brittany Spaniels. This is his debut novel.
Loading...
or support indie stores by buying on