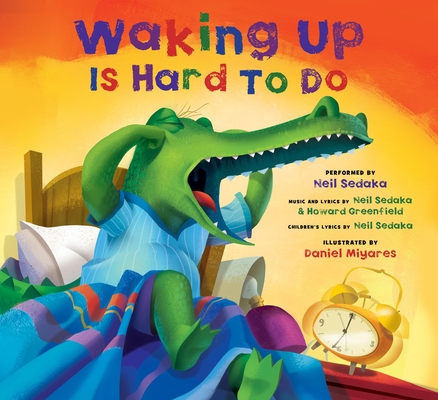 Waking Up Is Hard to Do

Rise and shine! It's morning time. The alarm clock's ringing, the birds are singing. Everything's saying: get up, get going! Breakfast is warming, school is calling. The street's are bustling, all the world is stirring.

It's sure to be a happy day with this bright and sunny picture book and CD, with new lyrics based on the hit song by Neil Sedaka and Howard Greenfield. Daniel Miyares's delightful art opens the eyes with its vivid colors, playful details, and adorable collection of animal characters.

And to make waking up just a little easier, there’s a CD with Neil Sedaka singing this happy song, plus two new songs with lyrics and music by Neil written especially for this CD: LIGHTNIN' JIM and SING.

Warm and friendly and full of fun, this is a musical and visual celebration of the everyday joys of home, family, and neighborhood.

The history of rock ’n’ roll would be incomplete without the innumerable contributions of Neil Sedaka.

Sedaka began studying music at the age of nine, and later catapulted to stardom with hits such as "Oh Carol," "Calendar Girl," "Happy Birthday Sweet Sixteen," and especially "Breaking Up Is Hard To Do." His songs "Bad Blood" and "Laughter in the Rain" both reached #1 on the music charts.

He has written over a thousand songs, received a Grammy Award for Record of the Year for "Love Will Keep Us Together," has been inducted into the Songwriters Hall of Fame, and has a star on the Hollywood Walk of Fame. In his fifty plus year career, Sedaka has sold over sixty million records. But he does not rest on these laurels: he continues to write, record, and perform worldwide. Sedaka has been married for over forty-five years to his wife, Leba, and they have two children and three grandchildren.
Loading...
or
Not Currently Available for Direct Purchase