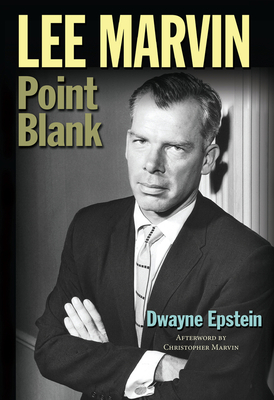 The first full-length, authoritative, and detailed story of the iconic actor's life to go beyond the Hollywood scandal-sheet reporting of earlier books, this account offers an appreciation for the man and his acting career and the classic films he starred in, painting a portrait of an individual who took great risks in his acting and career. Although Lee Marvin is best known for his icy tough guy roles—such as his chilling titular villain in The ManWho Shot Liberty Valance or the paternal yet brutally realistic platoon leader in The Big Red One—very little is known of his personal life; his family background; his experiences in WWII; his relationship with his father, family, friends, wives; and his ongoing battles with alcoholism, rage, and depression, occasioned by his postwar PTSD. Now, after years of researching and compiling interviews with family members, friends, and colleagues; rare photographs; and illustrative material, Hollywood writer Dwayne Epstein provides a full understanding and appreciation of this acting titan’s place in the Hollywood pantheon in spite of his very real and human struggles.

"It's a good  Hollywood bio, focusing on its subject's public and private lives without descending into the sort of gossip and rumor that typify many celebrity life stories" and "This is the kind of biography Lee Marvin deserves."—Booklist Online, December 21, 2012

"Unforgettable. . . . A surprisingly intelligent and heroic figure springs from the page. . . . Epstein looks at a complicated figure and presents him in a full-length, three-way mirror. And it is absolutely impossible to look away." —Stefan Kanfer, New York Times-bestselling author, Tough Without A Gun: The Life and Extraordinary Afterlife of Humphrey Bogart

"Epstein’s admiration for his subject is clear yet never too heavy-handed. A well-paced, thoughtful examination of a singular corpus of work that influenced film portrayals of violence in subsequent decades."—Kirkus Reviews (Nov. 15, 2012)


"Epstein has crafted a thorough, intimate, and highly readable portrait of this imposing actor who became an unlikely star...I doubt anyone will ever match its breadth and depth in assessing Lee Marvin’s life and career."—Leonard Maltin, Movie Crazy

"Epstein hits the bulls eye."—Noir City, a publication of the Film Noir Foundation

"Author Epstein takes on the not-inconsiderable goal of fleshing out Marvin as a genuine person. His outstanding book presents meticulously researched facts about the man and his work, combined with insightful comments and interviews from those who knew him."—Cinema Retro

Dwayne Epstein is a freelance journalist and author whose reviews, essays, and articles have appeared in numerous film publications and newspapers, including FilmFax, Outre, and Variety, as well as Bill Krohn’s books Serious Pleasures and Hitchcock at Work. He is also the author of several young adult biographies of subjects ranging from Adam Sandler to Hillary Clinton. A lifetime fan and collector of Lee Marvin photos and memorabilia, he has appeared in the A&E Biography episode devoted to Lee Marvin. He lives in Long Beach, California.