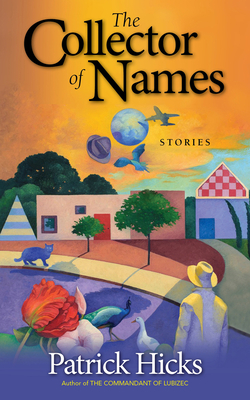 The Collector of Names

In his debut short story collection, poet and novelist Patrick Hicks reminds us of one such constant in all our lives—death. In these stories, most of which are set firmly in the heart of the country, the characters, all solid, well-meaning, hardworking people, are beset by tragedies both large and small, natural and unnatural. In the opening piece, “57 Gatwick,” which won the 2012 Glimmer Train Emerging Writer Fiction award, a terrorist bombing of a commercial airliner over the city of Duluth, Minnesota gives the town coroner a new task beyond the collection and identification of victims’ bodies, thus restoring hope to a shattered community. In “Burn Unit,” a lone, misanthropic woman who rescues stray and abused animals, in turn rescues her horribly burned niece from a neglectful family and a life of despair. An unpopular teenage girl discovers a hidden talent in the wake of a devastating storm in “Picasso and the Tornado.” In the “The Lazarus Bomb,” the crew of a B-17 bomber crew flying missions over Germany in WWII is suddenly imbued with the ability to give life rather than rain death. With gentle humor and deft, lyrical prose, this collection demonstrates that, despite these tragedies, unlooked-for miracles do occur.


Praise For The Collector of Names: Stories…

"Though there is much to admire in Patrick Hicks's debut story collection, The Collector of Names, what I find most affecting is his abiding faith in human perseverance, in simple human acts that matter." —Joe Wilkins, author, The Mountain and the Fathers

"The stories in Patrick Hicks’ The Collector of Names haunt me the way that Joyce’s 'The Dead' haunts me. And for the same reason: the precision of the evocation of our mortality, set against the different music of our lives." —Bruce Weigl, poet, Song of Napalm and The Abundance of Nothing

"These extraordinary stories look violence and pain in the eye, wonder how they might be erased—and then leave them, to deftly reveal, as if by magic, the restorative power of human love." —Kent Meyers, author, The Work of Wolves and Twisted Tree

"As I finished reading The Collector of Names, I realized—as one of the characters does early on in the collection—that 'the fiber of my heart has been rebuilt.' A mature hand is in the wheelhouse of these extraordinary stories." —Brian Turner, author, Here, Bullet and My Life as a Foreign Country

“Patrick Hicks has written a wonderful collection of stories that linger in the mind. . . . It’s powerful work that deserves wide attention and many accolades.” —Alan Davis, author, So Bravely Vegetative and Rumors from the Lost World

"Hicks, whose previous publications include novels and poetry, now offers a short story collection. Many of the stories contemplate death, but Hicks’ style and imagination are engrossing." —Ellen Loughgran, BooklistOnline.com

"The immediacy and urgency of the depiction of crisis moments make these stories magnetic . . . . More than simply cataloging or describing these confrontations with death or loss, this collection offers readers hope . . . [with] tales that are, overall, so compelling and inspiring." —Amanda Rettig, Colorado Review

Patrick Hicks is the award-winning author of five poetry collections and the novel The Commandant of Lubizec. His work has appeared in numerous journals, including Glimmer Train, the Missouri Review, New Ohio Review, Ploughshares, Prairie Schooner, and Tar River Poetry. He is the writer-in-residence at Augustana College and a professor in Sierra Nevada College’s low-residency MFA program. He lives in Sioux Falls, South Dakota.