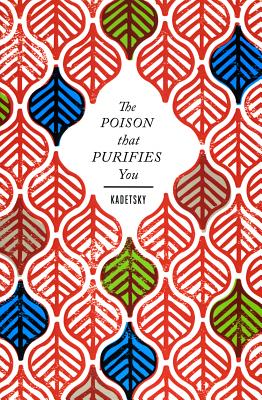 The Poison That Purifies You

Fiction. An Italian soul-seeker in India encounters an antique racist toy-bank from 19th-Century America and believes it to be an incarnation of Krishna. A fertility-seeking single woman in New York's Chinatown becomes fixated on a Chinese boy and plots a kidnap. An American archaeologist suffers from under-medicated bipolar disease after the 1976 earthquake in Guatemala. A New Yorker interprets the small earthquake of 2011 as a sign of conspiracy, and her obsession masks feelings of grief surrounding the disappearance of her self-destructive twin sister. Following the existential mystery of Paul Auster, Paul Bowles' critique of the tourist, and Flannery O'Connor's redemptive grotesques, Kadetsky adds a sharp and nuanced voice to the short story, calling upon her extensive travels abroad and study of languages for a portrayal of innocents often caught in the tangles of global alliance and discord.

This thought- provoking collection explores the variety of ways that we seek personal and spiritual connections--and the ways that we can poison ourselves and others in our quests. Elizabeth Kadetsky is a writer of keen insight and graceful prose.--Dan Chaon

Elizabeth Kadetsky deftly constructs fully realized places--some foreign, some familiar--and fully realized characters--some of them more like us than we'd like to admit. She tugs gently on these places and people until she finds their loose strings, and begins spooling out quiet strands of damage or dread. Before you know it, the dread is your own. These stories sneak up on you, hijack you, and before you know it, it's too late. A stunning first collection.--Brian Evenson.