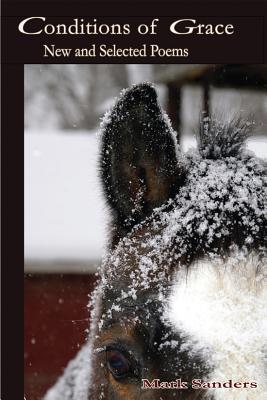 Mark Sanders’ Conditions of Grace: New and Selected Poems brings together the best work from a thirty-year career. These selections include powerful lyrics and narratives, metaphorical and fearless observations of the landscapes of region and heart, and a music that is at both subtle and alluring.
"Mark Sanders writes, he says, in “plain speech for a plain people.” But the complexities of his social and familial involvements, his awareness of self and others, mean that the lives rendered here are anything but plain. They are ornery, funny, bedeviled, passionate, private, and performative—I mean, the people and Sanders’ poems. This poet is of the same important tribe as Ted Kooser and Jo McDougall, Dave Etter and Jim Barnes, in tune with a type of Midwestern and democratic rhetoric—'plain' but dramatic, public but precise."—David Baker, editor of Kenyon Review
"Mark Sanders is a keen observer, a careful translator of experience and an archivist of the actual. He can 'turn sharp on a country thought' or channel Wallace Stevens, and his Conditions of Grace displays and utters a vital world of hawks, horses and humane humans either wrestling with sorrow or 'downing shots of Comfort.' His poems are deft and significant, and I’m betting most readers who find their way to this book will not be eager to find their way out. Instead, they’ll want to join Sanders as, 'We stand our furious ground.'"—R. T. Smith, editor of Shenandoah.

Mark Sanders is a Plains native—born, raised, and educated in Nebraska. His poems, stories, and creative essays have appeared in publications in the United States, Great Britain, Australia, and Canada, including Glimmer Train, Puerto Del Sol, Dalhousie Review, Prairie Schooner, Western American Literature, Ninth Letter, Shenandoah, and numerous others. Since 1977, he has authored a dozen or so chapbooks of poetry and prose, a collection of short fiction, and three collections of poetry. He has been nominated for Pushcart Prizes and received a notable mention in the 2009 Pushcart Anthology for a essay that appeared in Shenandoah; he also received acknowledgment as having written one of the 100 outstanding stories in 2007 in Best American Short Stories, edited by Stephen King. Also in 2007, he received the Mildred Bennett Award from the Nebraska Center for the Book for fostering Nebraska’s literary heritage. He has taught in colleges and universities in Nebraska, Missouri, Oklahoma, Texas, and Idaho.