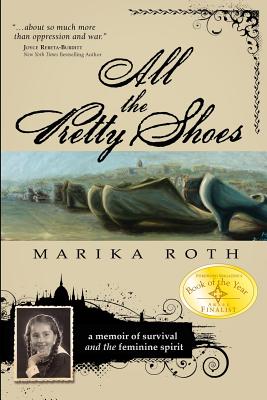 All the Pretty Shoes (Paperback)

On a snowy winter day in 1945 at age 12, Marika Roth barely escaped her own death only to witness the execution of hundreds of Jews by the side of the Danube. Running, starved and shoeless, through the streets of Budapest, ALL THE PRETTY SHOES is the story she survived to write.

"Marika Roth's narrative holds us captive throughout one hell of a ride: betrayal, sexual predators, love affairs, modeling career, kidnapping of her children... Not to be missed " -Tova Laiter, Producer, The Scarlett Letter and Varsity Blues

"A story about the indomitable spirit of a woman faced with unimaginable horrors and impossible odds. Roth tells her extraordinary tale with clarity and a remarkable lack of self-pity." -Jillian Lauren, Author, SOME GIRLS: MY LIFE IN A HAREM

"I remember Marika calling to say she'd discovered a memorial to the atrocity she'd witnessed ... I googled it and suddenly the draft of her memoir in my hands felt very, very heavy. This is a powerful book about overcoming the ongoing, chronic victimization that is all too often the prolonged second act of the refugee ordeal." -Robert Morgan Fisher, Award-Winning Writer

"...plucks at an emotional inner chord and serves as a portrayal of hope for the human condition." -Stefan Pollack, The Pollack PR Marketing Group

"I have read books about how people suffered during WWII, like Imre Kertesz who won the Nobel Prize, but none moved me as much as ALL THE PRETTY SHOES. Roth's style, the way she narrated how cruel life can be, without judging others, truly brought tears to my eyes." -Vivian Nagy, Hungary

"A story of self-discovery, wonderfully told, full of such drama that one can hardly believe that an innocent little girl could endure so much. I couldn't put it down " -Mary Stokes-Rees, China

"The story of Anne Frank cannot even compare to what Marika went through. A book all teenagers and young adults should read." -Shelia Durfey, Independent.