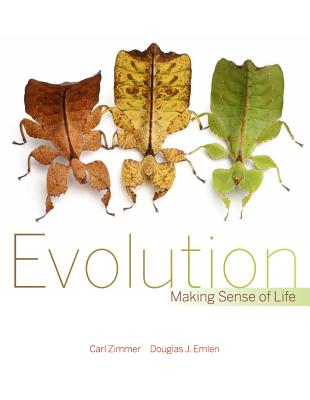 Science writer Carl Zimmer and evolutionary biologist Douglas Emlen have teamed up to write a textbook intended for biology majors that will inspire students while delivering a solid foundation in evolutionary biology. Zimmer brings the same story-telling skills he displayed in The Tangled Bank, his 2009 non-majors textbook that the Quarterly Review of Biology called “spectacularly successful.” Emlen, an award-winning evolutionary biologist at the University of Montana, has infused Evolution: Making Sense of Life with the technical rigor and conceptual depth that today’s biology majors require. Students will learn the fundamental concepts of evolutionary theory, such as natural selection, genetic drift, phylogeny, and coevolution. Evolution: Making Sense of Life also drives home the relevance of evolution for disciplines ranging from conservation biology to medicine. With riveting stories about evolutionary biologists at work everywhere from the Arctic to tropical rain forests to hospital wards, the book is a reading adventure designed to grab the imagination of the students, showing them exactly why it is that evolution makes such brilliant sense of life.

The New York Times Book Review calls Carl Zimmer “as fine a science essayist as we have.” Zimmer is the author of ten books, including Parasite Rex, which the Los Angeles Times called “a book capable of changing how we see the world,” and Evolution: The Triumph of an Idea, which Scientific American described as “as fine a book as one will find on the subject.” His 2009 textbook The Tangled Bank: An Introduction to Evolution, was named by Choice as an outstanding academic title of the year. Edward O. Wilson praised the book, saying, “The Tangled Bank is the best written and best illustrated introduction to evolution of the Darwin centennial decade, and also the most conversant with ongoing research. It is excellent for students, the general public, and even other biologists.” In addition to books, Zimmer also writes articles for the New York Times and magazines such as National Geographic, Scientific American, and Discover, where he is a contributing editor. His journalism has earned him numerous awards; he has won the National Academies Science Communication Award, and he is a two-time winner of the American Association for the Advancement of Science Journalism Award. He lectures regularly at universities and museums and is a frequent guest on radio programs such as This American Life, and RadioLab.

Douglas J. Emlen is a professor at the University of Montana, where he conducts research on the evolution of animal development. After earning his Ph.D. at Princeton, he spent three years as a postdoctoral fellow at Duke University before coming to Montana. Emlen’s research has earned him the Presidential Early Career Award in Science and Engineering from the Office of Science and Technology Policy at the White House, multiple research awards from the National Science Foundation, including their five-year CAREER award, and a Young Investigator Prize by the American Society of Naturalists. Emlen’s research has been featured in outlets including The New York Times and National Public Radio’s Fresh Air. His book, Animal Weapons: The Stories Behind Nature's Most Extravagant Structures, will be published by Henry Holt in 2013.