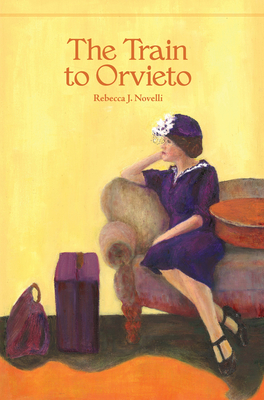 The Train to Orvieto (Paperback)

The Train to Orvieto, set in Orvieto, Florence, and Milan, Italy, and in the heartland of America, is an intimate story of love, loss, betrayal, and reconciliation that unfolds against an historical background of war and dramatic social change. It is a story enacted by fascinating three-dimensional characters and told by one of them, Fina, a history teacher who warns the reader, "The truth never mattered." It is a story depicting the clash of opposites—the desire for union with another and the need for solitude; loyalty and betrayal; change and tradition; the fatalism of rural Italy and the sense of familial and social duty, as against one's obligations to oneself—and it explores the classic theme of how the consequences of decisions made in youth carry through the remainder of one's life. The Train to Orvieto invites us to consider how much we re able to understand the truths of our own lives and what it costs to accept them.

The novel consists of the three parts. The first part concerns Willa, her adventurous mother; the second Losine, Willa’s elegant lover; and the third, Fina herself. Together, they compose a cross-cultural family saga of the marriage of Willa, a passionate artist from Ohio, and Gabriel, her possessive husband; and of Fina, a daughter who stands at the center of questions about who we are, what we can know of one another, and whether we can forgive.

Part I begins in 1935. Fina’s mother, Willa Carver, is determined to leave stifling Erhart, Ohio to become an artist in Italy. Her parents are opposed until her impecunious drawing teacher asks for Willa’s hand. Willa is quickly sent to Italy chaperoned by the well-connected Sra. Farnese. The two women meet Gabriele Marcheschi, a soldier from Orvieto, on the train. He eagerly courts Willa and sets their marriage date without asking her. After their wedding, Orvieto’s provincial culture presents daunting obstacles to Willa and her artistic ambitions.

Part II begins in 1949. Michel Losine is a Milanese jeweler, smuggler, thief, faux archaeologist who specializes in locating people gone missing during WWII. A decade earlier in Germany he evaded capture with help from Fr. Eric, a priest whom he has come to Orvieto to thank for that assistance, albeit belatedly. He encounters Willa by chance. The meeting with Fr. Eric raises questions about faith and truth for Losine, and he also receives an unwelcome warning about Willa.

Part III begins in 1968. Fina expects to marry Bruno, Gabriele’s assistant, who is widely thought to be a “catch.” When she is accepted to university in Milan, both Gabriele and Bruno try to prevent her from going.  During the conflict, long-hidden family secrets are revealed. Fina's bitter parting propel her on a journey that leads to more revelations about a past that has imprisoned her entire family.

Rebecca J. Novelli's varied career has included freelance writing and posts as communications director, events manager, publicist, publications manager, textbook writer, magazine editor, advance person, high school English teacher, and language teacher for recent refugees. When she isn’t writing, she enjoys painting and is currently at work on a series of paintings about women, among other subjects. She holds a BA in English from Pomona College, MA in Education from Claremont Graduate University, and an MFA in Fiction from Antioch University Los Angeles. She was also a member of Jim Krusoe’s Advanced Fiction Workshop in Santa Monica, CA. A native Californian, she and her family currently live in Seattle.