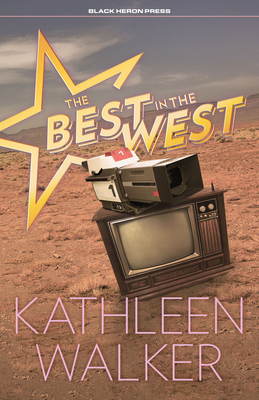 The Best in the West (Paperback)

It is the late 1970s, a period when local television news is changing, but few notice. The Best in the West provides a passport into this world, a world where "journalism" and "journalist" were not yet suspect terms. From the anchorman the audience foolishly loves to the harassed producers, photographers and editors, it is an unlikely but winning team.

It is a male club of former newspaper and radio reporters chosen for their experience in getting the news. Only a few women have earned admission. Ellen Peters is one. Tough and cynical, she sees reporting as a job. For the idealistic newcomer Debbie Hanson, it is a vocation, a way to get the truth to the public. While Debbie tries to fit in, Ellen stands back and watches. She is, after all, a reporter.

Kathleen Walker spent ten years as a television reporter and producer, covering the evening news for network affiliates in New Mexico and Arizona. She moved on to freelance writing after her last position with PBS in Tempe, Arizona. The Best in the West is based on her experience in television news.

She did her undergraduate work in Latin American History at La Universidad de las Americas in Mexico City and earned her masters degree in Corporate and Political Communications at Fairfield University in Connecticut.

She resides in Tucson, Arizona.


Praise For The Best in the West…

“The second-best local TV program in Phoenix…provides the setting for this fictional look back at TV journalists struggling to win hearts and minds and market share in the late 1970s. Fans of newsroom drama will recognize the characters—the young idealist who ardently believes delivering the truth is the highest calling, the jaded news veteran who’s been disappointed too many times, and the evil, self-aggrandizing anchorman—but they are deftly portrayed, and their interesting backstories will keep readers turning pages. Tucson author Kathleen Walker, herself a TV newsroom veteran, recalls a time 40 years before #MeToo, when entertainment began to vie with solid reporting for precedence on the local affiliates, and women came aboard as new and not-necessarily-welcome members of the news team. There’s an authentic feel to Walker’s fiction, and genuine sympathy for the dedicated reporters serving at the pleasure—and the whim—of the all-male club that was (and perhaps still is) the nightly news.” — Helene Woodhams, Arizona Daily Star

“[The Best in the West] raises important political concerns…. At the same time, anyone doubting that we’ve made progress over the past 40 years need only read this to be reassured. A fast-paced…story of a bygone era.” — Kirkus Reviews
or support indie stores by buying on
Copyright © 2020 American Booksellers Association