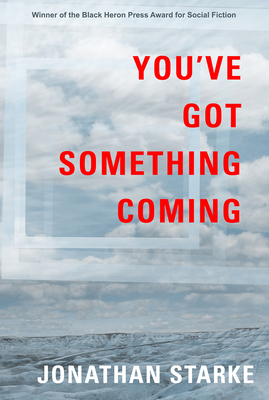 You've Got Something Coming (Paperback)

Trucks, an aging boxer, breaks his daughter, Claudia, out of a children's home in Wisconsin one night during the dead of winter. She is a winsome, feisty little girl who tries to hold her father to account, and Trucks loves her unconditionally. He gives her used hearing aids to help with her deafness, and they begin hitchhiking to Nevada. Claudia's mother, an addict, has disappeared and is probably dead. Their first ride takes them to Sioux Falls, South Dakota. They have only $30. They meet a number of people on their journey, including June, a woman about Trucks' age who was abandoned by her husband, and Gerald, an older rancher in Montana who offers them a place to stay, an offer Trucks refuses. Trucks is unable to find work, except for boxing—he is trapped in an activity for which he is no longer suited. Depressed, confused, and his mind no longer reliable, Trucks steals a car so that he and Claudia can drive east.

Jonathan Starke is a former bodybuilder and boxer. He has spent six of the past seven years hitchhiking through sixty countries. His stories and essays have been published in a number of magazines and literary journals, including The Sun, Missouri Review, Threepenny Review, North American Review, Gettysburg Review, Shenandoah, and others. He is the founder of Palooka, an international literary magazine. You've Got Something Coming is his first novel.

Praise For You've Got Something Coming…

"This is the most compelling and emotionally bruising novel I've ever read. Trucks's epic love and endurance to suffer for his daughter, Claudia, spark a northern odyssey I will never forget. Fraught with moral battles and offering a deep look at the back roads of our country, every page is stamped with grit and grace. I felt punch-drunk, yet renewed after taking this journey, and the language, as cool and crisp as mountain water, announces the arrival of a marvelous talent."—Devin Murphy, author of The Boat Runner and Tiny Americans

"Jonathan Starke has written a sparse, elegiac, detailed novel about what it means to be a man without money."—Laurie Blauner, author of The Solace of Monsters and Infinite Kindnes

"You've Got Something Coming is a commanding novel that makes a haunting impression as it explores the fallout of a father's relentless, flawed love.” —Karen Rigby, Foreword Reviews

"Starke’s knockout punch of a debut follows the adventures of an aging down-on-his-luck boxer and his deaf, motherless daughter. While suffering the aftereffects of his latest bout, Trucks breaks Claudia out of a children’s home in Wisconsin and heads west with her in search of a better life for both of them, vowing to his daughter that he’ll stay out of the ring. Father and daughter hitch their way across Minnesota, South Dakota, and Montana, encountering helpful people along the way, among them June, a kindly woman whose husband has just left her because she is barren, and Gerald, a widowed Montana farmer who gives them a temporary home. But as Trucks tries to bond with his daughter and make the best life for her he can, fate and his inner demons conspire against them, and, in the end, a desperate, short-sighted Trucks returns to the ring for a low-paying match, risking his health for one last attempt to support Claudia. Trucks’s relationship with his daughter is the emotionally fraught core of this tough and tender novel. Taking punishment both in and out of the ring, Trucks will remind readers of Hemingway’s punch-drunk The Battler, as well as the broken dreamers of F.X. Toole’s Rope Burns and Leonard Gardner’s Fat City. Starke’s bruising, brooding book is a real heartbreaker.” —Publishers Weekly
or
Pre-Order Now
Copyright © 2020 American Booksellers Association