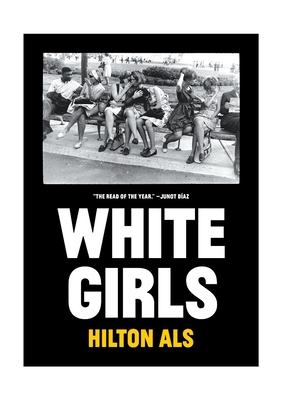 White Girls, Hilton Als's first book since The Women fourteen years ago, finds one of The New Yorker's boldest cultural critics deftly weaving together his brilliant analyses of literature, art, and music with fearless insights on race, gender, and history. The result is an extraordinary, complex portrait of "white girls," as Als dubs them--an expansive but precise category that encompasses figures as diverse as Truman Capote and Louise Brooks, Malcolm X and Flannery O'Connor. In pieces that hairpin between critique and meditation, fiction and nonfiction, high culture and low, the theoretical and the deeply personal, Als presents a stunning portrait of a writer by way of his subjects, and an invaluable guide to the culture of our time.

One of the A.V. Club's Favorite Books of the Year!

"I read Als not only because he is utterly extraordinary, which he is, but for the reason one is often drawn to the best writersbecause one has a sense that one's life might depend on them. White Girls is a book, a dream, an enemy, a friend, and, yes, the read of the year."
Junot Díaz

"Hilton Als’s White Girls gave me a gift very few books do: of hearing a voice that’s new, that comes as if from a different room. A nonsensical thing to say in one sense: he’s been writing brilliantly and visibly for almost 20 years. But there’s something about the work in this book. It's a leap forward not merely for Als as a writer but for the peculiar American genre of culture-crit-as-autobiography. Its bravery lies in a set refusal to allow itself all sorts of illusionsabout race, about sex, about American artand the subtlety of its thinking is wedded maypole-fashion to a real confessional lyricism. had a lot of black gay man in us, Als taught me that I have a lot of white girl in me, too, and so does he. And so do you, is where it gets interesting. If you think that sounds like another blurb-job or post-postmodern twaddle, I defy you to read this book and come away with a mind unchanged." John Jeremiah Sullivan, author of Pulphead

"A comprehensive and utterly lovely collection of one of the best writers around." Boston Globe

"This is a book that readers will want to spend the rest of their lives with." Library Journal (Starred review)

"Als' work is so much more than simply writing about being black or gay or smart. It’s about being human." Kirkus (Starred review)

"Mesmerizing... [Als] proves to be a compassionate writer looking for unityeven if it can’t always be found" Publishers Weekly (Starred review)

"Als is pyrotechnic, lifting off the page in a blast of stinging light and concussive booms that somehow coalesce into profound cultural and psychological illuminations." Booklist

"Als has created a work of art."Christopher Bollen, Interview Magazine

"[E]verything Als is saying is a vivid, bright truth"Lambda Literary

"Als is one of the most consistently unpredictable and surprising essayists out there, an author who confounds our expectations virtually every time he writes." Los Angeles Times

"Nothing short of masterful." HTML Giant

"This book will change you." Chicago Tribune

"[Als] is a poet on the page, and his insistence on breaking the essay form defines his liberation as a writer." The Rumpus

"[Hilton] Als interweaves personal revelation with cultural touchstones, sometimes hopping from topic to topic at a breakneck speed, other times examining concepts so strategically and methodically his words become scalpels, flaying open unacknowledged bias, privilege, and conflict where he sees it."
--The A.V. Club

"[Hilton Als] is above all a writer fascinated by people: their little habits and turns of phrase, their multi-layered sexualities, and their unfathomable relationships to each other or, in the case of his famous subjects, to the world." --UTNE

"Mr. Als is a national treasure." the New York Observer

"[White Girls] is a book that rewards rereading if not requires it, but that rewards the investment amply, if not twofold." Pittsburgh Post-Gazette

Hilton Als became a staff writer at The New Yorker in October, 1994, and a theatre critic in 2002. He began contributing to the magazine in 1989, writing pieces for The Talk of the Town. Als was a staff writer for The Village Voice and an editor-at-large at Vibe. He has also written articles for The Nation and collaborated on film scripts for "Swoon" and "Looking for Langston." Als edited the catalog for the Whitney Museum of American Art exhibition entitled "Black Male: Representations of Masculinity in Contemporary American Art," which ran from November, 1994, to March, 1995. His first book, The Women, a meditation on gender, race, and personal identity, was published in 1996. In 1997, the New York Association of Black Journalists awarded Als first prize in both Magazine Critique/Review and Magazine Arts and Entertainment. He was awarded a Guggenheim for Creative Writing in 2000 and the George Jean Nathan Award for Dramatic Criticism for 2002-03. In 2009, Als worked with the performer Justin Bond on "Cold Water," an exhibition of paintings, drawings, and videos by performers, at La MaMa Gallery. In 2010, he co-curated "Self-Consciousness," at the Veneklasen Werner Gallery in Berlin. Als has taught at Yale University, Wesleyan, and Smith College. He lives in New York City.
Loading...
or
Not Currently Available for Direct Purchase