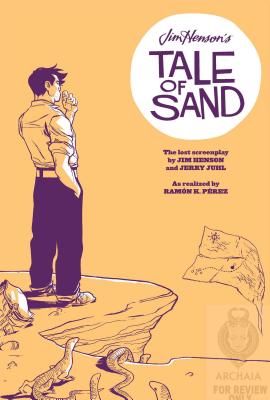 Join us as we explore this missing piece of Jim Henson''s career in a celebration of his creative process. Discovered in the Archives of the The Jim Henson Company, A Tale of Sand is an original graphic novel adaptation of an unproduced, feature-length screenplay written by Jim Henson and his frequent writing partner, Jerry Juhl. A Tale of Sand follows scruffy everyman, Mac, who wakes up in an unfamiliar town, and is chased across the desert of the American Southwest by all manners of man and beast of unimaginable proportions. Produced with the complete blessing of Lisa Henson, A Tale of Sand will allow Henson fans to recognize some of the inspirations and set pieces that appeared in later Henson Company productions.

Jim Hensen is best known for his work on the Muppets as well as his other creative works in story and film such as The Dark Crystal, The Storyteller, and Sesame Street. The humor and whimsy of his characters have continued to entertain generations of children over the past 42 years.

"The mostly wordless comic is a fantastic voyage inside yet another incredible world of a creative genius."—Comics Alliance
"This is one of the most beautiful books I’ve ever held in my hands."—Newsarama
"It’s a book that not only stays with you, but compels you to go back to it multiple times."—Secret Identity Podcast
"Perez did an admirable job of bringing the script to life in a way that pays homage to Henson's own imagination."—IGN
"If you’re a big Henson fan, Tale of Sand should open the doors to a jaw-dropping new world."—Complex