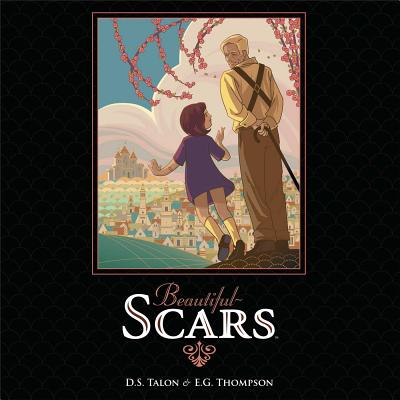 Every scar tells a story Scars are the signs of a life well lived. Ridley Bourne is in the twilight of his life. Born before 1900, he has lived through some extraordinary times in human history, and witnessed some of man's greatest and worst moments, from the birth of the automobile to the horrors of WWI. And his long life has left him with scars, each of them a testament to these moments. In his English garden, Ridley sits down with his granddaughter, Maddie, and starts to tell her the stories of this scars, and those stories become the basis of a journey into both her grandfather's past and the soaring heights of imagination, as she learns that scars are just one more way to hold on to a memory.

Durwin S. Talon is an illustrator, comic book creator, designer, digital artist and educator. He has produced work for DC Comics, Oni Press, White Wolf Publishing and Wizards of the Coast and has written textbooks for TwoMorrows Publishing. He created Bonds for Image comics and is co-creator on Beautiful Scars for Archaia Comics. E. Guin Thompson is an illustrator, cartoonist, designer, dimensional artist and educator. She has created illustration work for clients including DC Comics, Upper Deck and others. She is co-creator on Beautiful Scars for Archaia Comics and has several solo projects in development.
or
Not Currently Available for Direct Purchase
Copyright © 2020 American Booksellers Association