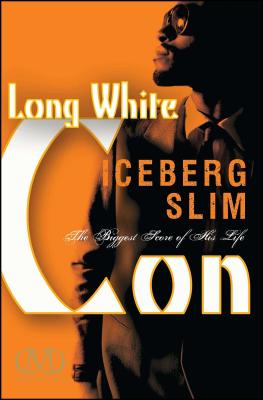 The Biggest Score of His Life

Iceberg Slim, best-selling author of Pimp and Trick Baby, brings us yet another riveting classic. Continuing the saga, Long White Con tells the story of the most incredible con man ever to have risen. Iceberg Slim's story is now depicted in a major motion picture distributed worldwide. Iceberg Slim: Portrait of a Pimp shows Slim's transformation from pimp to the author of 7 classic books.

Picking up where Trick Baby left off we dive into the world of Johnny O’Brien, better known as White Folks. After learning to use his fair skin to his advantage to rise to the top of the Chicago con game, Folks is back for the big money and the big stakes of the long con.

Following the death of his partner and mentor, Blue, Folks takes off for Canada. Having honed his skills and polished his acting, Johnny is done cheating marks out of small money. With a gang of grifters working with him, High Pockets Kate, High Ass Marvel and the Vicksburg Kid among them, Folks is after the biggest score of his life.

Iceberg Slim, also known as Robert Beck, was born in Chicago in 1918 and was initiated into the life of the pimp at age eighteen. He briefly attended the Tuskegee Institute but dropped out to return to the streets of the South Side, where he remained, pimping until he was forty-two. After several stints in jail he decided to give up the life and turned to writing. Slim folded his life into the pages of seven books based on his life. Catapulted into the public eye, Slim became a new American hero, known for speaking the truth whether that truth was ugly, sexy, rude, or blunt. He published six more books based on his life and Slim died at age 73 in 1992; one day before the Los Angeles riots.
Loading...
or support indie stores by buying on