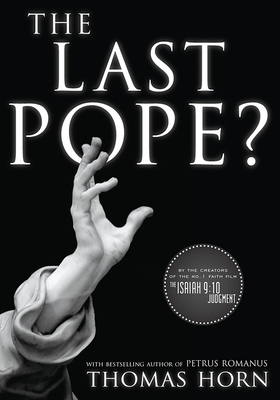 This stunning documentary takes a balanced and objective look at a prophecy that leads many Catholics and non-Catholics alike to wonder if Pope Francis will be the last pontiff before the onset of the Great Tribulation and the return of Jesus. The Last Pope? comes from the producers of The Isaiah 9:10 Judgment, the No. 1 faith movie of 2012 and 2013. Shot in Rome, Geneva, Ireland and the U.S., The Last Pope? explores the prophecies of St. Malachy and their uncanny predictions about popes of the past through interviews with medieval historians, Vatican experts and the best-selling authors of Petrus Romanus: The Last Pope Is Here.

George Escobar is Vice President of WND Films and TV in charge of programming, production and strategy. Escobar directed THE ISAIAH 9:10 JUDGMENT for WND Films, which was Amazon's No. 1 bestselling Faith DVD in 2012 and 2013. He is co-founder of Advent Film Group, whose inaugural movie, COME WHAT MAY, was seen by over 3.5 million people online and on TV. Advent's new films for 2013 include HERO, THE SCREENWRITERS, and ALONE YET NOT ALONE produced for Enthuse Entertainment. Ken Carpenter is an award-winning filmmaker who has worked in the mediums of film, television and music video. He recently produced and directed John Tesh: Alive, a new PBS television special, as well as 13 episodes of a new human-interest television show with Joni Eareckson Tada. Carpenter garnered a 2007 Dove Award for the long form video, Amy Grant - Time Again. Carpenter founded Franklin Films in 1994.
Loading...
or
Not Currently Available for Direct Purchase